The Average American's views of the news

I caught Joe Lieberman's speech at the convention last night. It had to be one of the most historic speeches ever made, anywhere! No, he wasn't the first Democrat to ever address The Republican Convention, he may not be the last either. He didn't tell the attendees anything they didn't already know. Actually, the speech itself wasn't the historic part, the RESULTS I expect to see from it, now THAT was the historic part. When Joe stopped talking to the delegates, and turned his attention to independants and fellow Democrats, he did what possibly no one else could have done. He, in just a few moments, persuaded millions of undecided voters to go vote for McCain this November! Well done Joe!! 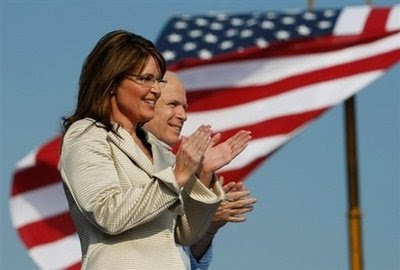 What a nice picture of the new administration! John McCain couldn't have chosen a better running mate. I am confident that independants will flock to the poles in November to hand McCain/Palin a landslide victory. When was the last time we had the chance to elect MODERATE politicians to these two positions?? What are most Americans--Liberal, conservative, or MODERATE??? Are McCain and Palin moderate?? You bet they are!! Sure, they are both conservative in some areas, but overall they are moderate, some even say maverick(myself included)!

Back last spring, I made the prediction that McCain would take the popular vote with 60%. I don't recall if that was in a post or a comment somewhere. That may have sounded brash to many at the time, but I hereby reiterate that prediction, McCain/Palen will win in 2008 with 60% of the popular vote and a solid victory of the electoral college!! 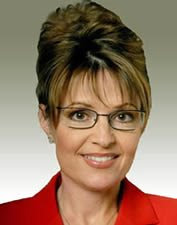 When Sarah Palin introduces herself to America tonight at the Republican National Convention, American's will see for themselves what a great choice she is for Vice President. Her intelligence and charisma will shine through loud and clear. Hopefully, she will touch on her experience and people will see that she is actually more experienced than NOBAMA. Even if she weren't, there is only a small chance she would need to "be ready on day one", with NOBAMA, it is a 100% chance he would need to "be ready on day one"---and HE ISN'T!!

As a side note for any Alaskans reading this, all Americans owe you our heartfelt thanks for loaning us your native daughter and your great Governor. The loan will probably end up being for at least 12 years!
Posted by Average American at 1:05 PM

I agree with you on the Liberman speech AA.
I loved the way that Joh Voight gave it to alan Colms also. Did you catch that?
You would have to had been watching the Fox station to see it.

Man, I'm sorry I missed it!

I just read about a week ago that Kid Rock's a Republican, just a gossip tidbit to munch on.

Anonymous said...
This comment has been removed by a blog administrator.
September 3, 2008 at 6:42 PM

McCain spoke to his staff and advisers in the War Room this afternoon, and vowed to fight hard to Sarah Palin against attacks from the media and Democrats.
Fight hard and fight smart, John and Sarah - we're behind you.
And by the way, don't take any prisoners.

LauraB, thank you. I guess I missed that one. Alan Colms is a fucktard, please excuse the language, but I can't stand him.

Brooke, you missed some good speeches, hope you were watching tonight! Sarah Palin was just super!

Z-Man, glad to hear that, and I kinda like his music too.

Throwing stones, I'd say you got your wish. Rudy was....Rudy tonight! Brilliant as usual!

DD2, I have to say, we have one helluva team!! It sure feels good to be an American today!

If i'm not mistaken the Democrats lost Lieberman due to the stupidity of the nutroots, i wonder if they'll lose this election to them as well. It'll be richly deserved i think, that lot are a shameless bunch and sooner or later the Democrats have to banish them into the ether.

And i hope your prediction is 100% accurate.