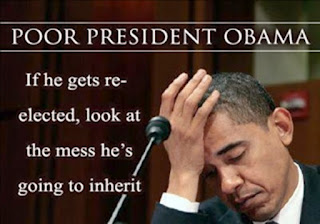 What Bozo inherited last time was a cake walk compared to what ROMNEY and RYAN will inherit this time!  If they can just get rid of the bulk of NObamacare and create enough jobs to get the unemployment percentage back down around 5% where it usually is, I will call that a VERY successful term.  The rest of the major problems, the economy, the national debt, and the yearly TRILLION DOLLAR deficits will almost self-correct when people start working and PAYING taxes again instead of RECEIVING tax subsidies of all flavors.  To me, that's a frigging NO-BRAINER!  Jobs (private sector jobs!!!) are the key to fixing the rest of the problems.

Let's add in getting rid of a LOT of tax loopholes so that we can get added revenues from people and corporations who currently pay little or no taxes.  THIS is the Republicans biggest downfall, they HAVE to find a way to let the electorate know that they WILL be taxing some of the rich more.  They have GOT to increase revenues, but, they do not necessarily have to change the tax rates.  The rates should spend at least the first year of the term where they are now, but with the Bush tax cuts for ALL left intact.  Let businesses know what lies ahead for them, lower taxes coming--NOT higher, except for the ones that have been loopholing themselves into a no-tax situation.  THEY will pay more!

One last point.  The United States government HAS GOT TO STOP using the tax code to dish out credits.  Tax has to be a POSITIVE number!  Credits should not be handled by IRS.  If we must have an earned income credit, so be it, but call it a program, NOT a tax!!!  If a person "pays" $1000 in taxes, but receives a $5000 refund for the year, he IS NOT A TAXPAYER!!!!  Don't call him one and don't let him consider himself one!


Posted by Average American at 6:31 PM