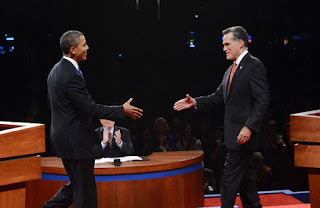 I watched this entire debate on ABC News and was quite pleased with the after debate chat.  George Stephanopoulos of all people, gave Romney the win.  Several other Democrats did the same, including a Democratic strategist (female, black) whom I am sorry I did not catch the name of.  The prevailing feeling amongst all that I heard was that Romney was a strong debater and did not give an inch for the entire 90 minutes, and that he had won this debate, and probably a bump up in the polls in the days ahead.

I actually have to take issue with their exuberance.  Yes, he did do very well!  Yes, I expect to see the numbers get better.  Yes, the Republican base was undoubtably reinvigorated.  No he was NOT perfect!

There was a pretty good discussion going on concerning the whole housing loan fiasco.  Dodd/Frank regulations were discussed, but talk of the greedy banks writing shakey loans and lending to people who could never possibly afford the payments was the main issue.  WHY DIDN'T ROMNEY BRING UP OBAMA'S LAWSUIT AGAINST CITIBANK???  How about Fannie and Freddie?  How about their contributions to Obama's campaign?  It wasn't the banks that insisted on making loans to shakey borrowers, it was the bleeding hearts that wanted to make EVERYBODY able to "own" a home, even if it was only temporary.  It was NOMOBAMA himself that "built that."  Nobody else "made that happen!!"  What a fantastic opportunity blown!!  FIFTY MILLION people could have actually learned something new!!  Something the media never told them.  What a wasted opportunity.

Posted by Average American at 11:48 PM

I agree with your assessment. Unfortunately all we have as an alternative to O is Mitt. There were much better candidates who have conservative cores than he. I believe there are 2 main reasons why alot of damaging stuff was not brought up:
1. The debates, as always, are being moderated by Lib/Socialist sites and
2. Mitt, not being the conservative stalwart, does not want to appear a racist by attacking this yahoo for the socialist/marxist he is or who the democrats in general are

Thank you for you well wishes RE: my Birthday : - )

Romney did do well Wed - I was surprised that he stood strong..
Carol-CS

Rosey, Mitt might just be the one candidate we have a good chance with. A more conservative nominee would have a harder time garnering independent voters to his or her side. Last thing I want to see is 4 more of the same. Let's make sure we do NOT repeat 2008! We either make do with Mitt or watch as the U.S. of A. goes down the crapper forever.

You're welcome C.S. Yes, Mitt did VERY well. I'm having a blast watching the dummycrats wiggle and squirm. They've spun a warehouse full of yarn over this so far, and there is no end in sight. Bad day to be a dem. heh heh heh!!

It is my understanding that the banks were forced by the federal government to make some of those shaky loans and so yes Romney's performance could have been so much better but ah well there are two more debates to go.

Right Z-Man, it was called the "Community Reinvestment Act." First enacted during the Carter years and then strenghtened during the Clinton years, it and NOMObama's lawsuit forced the banks to get real lax in their loan requirements. As banks sold the junk to Fannie and Freddia, they quickly learned how profitable these loans could be and voilla!! the housing fiasco! People most to blame, NOMObama, Barney Franks, and Chris Dodd, the same 3 that got the biggest campaign contributions from Fannie and Freddie---gee, I wonder why?

we got better than we hoped...at least I think we did.
But Romney did miss a lot of chances for some truth telling.....
let's hope the future debates bring more out.

I thought the stuff about the Constitution at the end was a total waste of time; as if most Americans give a rat's poop about it, or understand it. They should have heard him say "So, you've heard the differences in our philosophies and this is why I will be a better president..A, B. C..."

My best part of the debate was seeing Obama sweat!

I didn't watch it, but I get the same sort of sentiment from other sources. Romney needs to understand that these are the only free opportunities he'll get to make himself heard to the American people, the media have coddled and sheltered obama for so long and Romney has to expose him for the failure and disgrace he really is.

Once these debates are over, just you watch, the media will start carrying bald-faced lies for the obama camp. I know a lot of you Americans are aware of the bias, but believe me when I tell you, you ain't seen nothing yet.

What worries me is that the republicans are either too lazy or too stupid to see this. With obama's pathetic track record, Romney should already be miles ahead in the polls, they're not asking themselves why that isn't and how to counter it.