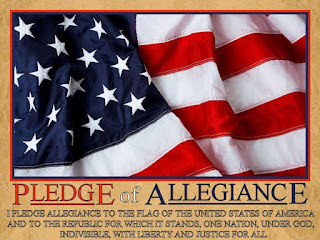 I pledge allegiance to the flag and to the republic, I DO NOT PLEDGE ALLEGIANCE TO THE PRESIDENT, at least not to the one we are stuck with for another four years.  The Average American will be taking some time to decide which direction to take the fight into the future.  My first couple of posts on this blog concerned forming a  LEGITIMATE third party and that may be what I end up trying to do.  The extreme left AND the extreme right have left to many of us in the middle with no representation.  Just because John McCain and now Mitt Romney were not "conservative enough" Millions voted for extremists or didn't vote at all.  Thanks alot assholes!

To all my friends out there, I'll see ya when I see ya.  I'll probably drop by for visits, but I may not comment because my language might offend some of you.

Posted by Average American at 2:10 PM

I feel the same way, wish it weren't so, but it is what it is.

Best of luck my friend. We are going to need it

Average American,
Take care of yourself, and please stop by my web site whenever you can.

I will continue posting, but will be officially in mourning for the time being -- probably till Thanksgiving, maybe longer.

My hope is in the Lord. I have given up on mankind.

Frankly, I think it's time for another Great Flood.

"Woe unto them who forsake Him.
Destruction shall fall upon them,
For they have transgressed against Him."

To abstain from sin when one can no longer sin is to be forsaken by sin, not to
forsake it. See the link below for more info.