STUPID IS AS STUPID DOES 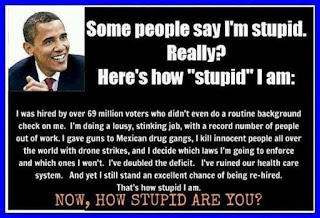 NObama won the 2008 election for many reasons.  Some voters just thought it would be so nice to see a black/brown skinned President.  You  know, break the glass ceiling.  Prove to the world that the U.S.A. is over our bigotry and racism.  Prove that they themselves weren't racist.  Others had real concerns with George Dubya Bush's second term.  Let's face it, he started spending like a drunk sailor those last 4 years.  I know, I know, he had lost the Congress, so it was only partially his fault.  But he still spent wildly.  And of course, NObama got 95%--98% (depending who you listen to) of the black vote.  Still others, the group I blame the most, were far right Republicans and Libertarians who just couldn't suck it up and vote for John McCain.  Well, that's past history, water over the dam.  Question is, what's next?
Well, what's next should be to rethink what we THOUGHT then, versus what we KNOW now!  Look at the photo above, ask yourself "Am I better off today than I was 4 years ago?"  "Is America better off now than it was 4 years ago?"  Has NObama been a good President?  Has he even been a fair President?  Does he deserve a second chance?  Will 4 more years of him and his administration suddenly make things better?
The six questions in the above paragraph can all be answered quite simply with one word in my book.  That word?   N O ! ! !
NOMObama!!!~!
I am fully aware that the few people that see this post at my blog did not and will not vote for him.  Please spread this around, at least the picture.  It says it all really.
This picture came from "Rosie on the Right", a political friend from facebook.  You might want to visit her at https://www.facebook.com/pages/Rosie-Onthe-Right/184115634955854
Posted by Average American at 2:46 PM

Obama has been a divisive fool and a lot of people drank that Kool Aid. There are still people on the right who complain that Romney is not conservative enough. I beg to differ, but the proof of the pudding is in the eating.

Jack, where have I seen those words before. Oh, that's right, I wrote them. Thanks for the visit anyway.

LL, I completely agree. Thanks for visiting and commenting.

NObama is confident in deciding when and where to play golf.

Oh oh, another right wing extremist. Thanks for dropping by. I like the name, and yes, you are right about the golf. In fact, it's the only thing he's reasonably good at.(or so I've heard anyway)

As for the "You didn't build that business" speech. Obama said what he said, and meant what he said, and there is no way to spin it otherwise. Nice try., but no cigar. My dad DID build his business, he got nothing handed to him, he was an affirmative action employer before anyone ever thought of that term, and yes, he used some roads, but HIS taxes paid for those roads -- the government does not have any of its own money. THAT is the intellectually dishonest part of Obama's false comments, as well.. So you Libs and you Progressive's or whatever the hell you are calling yourselves these days, don't try to pull the wool over our eyes, we are not as dumb as YOU think we are.

wow this blog is crap.