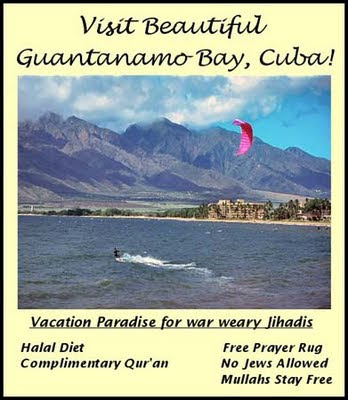 WASHINGTON – The Obama administration is looking at creating a courtroom-within-a-prison complex in the U.S. to house suspected terrorists, combining military and civilian detention facilities at a single maximum-security prison.

Several senior U.S. officials said the administration is eyeing a soon-to-be-shuttered state maximum security prison in Michigan and the 134-year-old military penitentiary at Fort Leavenworth, Kan., as possible locations for a heavily guarded site to hold the 229 suspected al-Qaida, Taliban and foreign fighters now jailed at the Guantanamo Bay detention camp in Cuba.

The officials outlined the plans — the latest effort to comply with President Barack Obama's order to close the prison camp by Jan. 22, 2010, and satisfy congressional and public fears about incarcerating terror suspects on American soil — on condition of anonymity because the options are under review.

White House spokesman Ben LaBolt said Friday that no decisions have been made about the proposal. But the White House considers the courtroom-prison complex as the best among a series of bad options, an administration official said.

Getting the Standish prison ready for the detainees would be costly. One
official estimated it would cost over $100 million for security and other
building upgrades.

Several Michigan lawmakers, including Senate Armed Services Chairman Carl Levin and Rep. Bart Stupak, both Democrats, have said they would be open to moving detainees to Michigan as long as there is broad local support.

Yeah right! Like that is going to happen! There probably isn't a place in the country where people would give "broad support' for this monstrous calamity.

Administration officials said the U.S. Disciplinary Barracks at Fort Leavenworth is under consideration because it is already a hardened high-security facility that could be further protected by the surrounding military base.

It's not clear what would happen to the military's inmates already being held there. Nearly half are members of the U.S. armed forces, and by law, cannot be housed with foreign prisoners.

Kansas' GOP-dominated congressional delegation is dead set against moving Guantanamo detainees to Leavenworth. Residents told Sen. Pat Roberts, R-Kan., at a town hall meeting in May that 95 percent of the local community opposes it. Sen. Sam Brownback and Rep. Lynn Jenkins planned a news conference in Leavenworth on Monday to "discuss opposition to any efforts to move detainees to Fort Leavenworth."

I guess they won't be very welcomed in THIS RED State! Why should the good people of Kansas feel in any way obligated to help NObama keep his stupid promise anyway?

Administration officials say they are determined to keep to his promise of closing Guantanamo in January as a worldwide example of America's commitment to humane and just treatment of the detainees.

Glenn Sulmasy, an international law professor at the U.S. Coast Guard Academy in New London, Conn., said the prison-court complex will "be difficult, but it's logical."

"This is all based on Closing Gitmo by 2010, which seems to be a priority, and if we are going to do it, we have to step up to the plate and find solutions to the conundrum we're facing," said Sulmasy, who agrees with the administration's efforts. "And this seems to be the most pragmatic way ahead."

It's ALL about the promise. Hey NObama, it's OK to break promises that NEVER should have been made in the first place!!

You may follow this link to get the entire story. I just posted the most pertinent paragraphs.

Well, for those that know me, you must be aware that I would not follow this track to deal with a very sticky problem. I won't bore you with all of NObama's details of the plan, but I WILL tell you W.W.A.A.D.

To begin with, I never would have made such an ill-conceived promise, but since that promise was made, here's the proper way to handle it. WITHOUT the help of a huge staff of speech writers and advisors, I would prepare an address to the American people explaining WHY I must break my promise to close Gitmo. I would NOT worry about addressing any other audience. The rest of the world will hear this speech, the media will take care of that! True leadership dictates being able to admit mistakes and take corrective action. This could be his chance to actually INCREASE his standings in the polls. Most conservatives and independents would be able to support him on at least this one issue. Here's the speech:

"Good evening ladies and gentlemen. I stand before you tonight with news that some of you will be delighted to hear, while others will be disenheartened. As you know, during the campaign and since then as recently as last month in Cairo, I have been adamant about closing down the facility at Guantanamo Bay, Cuba. After much study, soul-searching, and discussions with everyone involved, I have concluded that the best scenario is to maintain what we have. We are looking into more transpanency as to their treatment so as to assure the world that they are in fact getting the best possible treatment. That is the underlying question in the minds of many, and that can be addressed at Guantanamo as well or better than anywhere else. We are still diligently trying to find homes to resettle many of the detainees, but are finding this a very slow process. Many of the most hardened terrorists we are holding may never be released, so we have to have a long-term answer, and I think we have it already."

That took me about 10 minutes to write. If I really had to do it, I would spend much more time and do a much better job, but, I think you get the idea. NObama, keep it short and sweet, 15 minutes at the most. Tell America you are just human. Tell them you are NOT the messiah, even though I know you think you are. Let people know that you are man enough to admit when you screw up!
Posted by Average American at 5:18 PM

Let's get a consortium together -and buy Gitmo-
after the terrorists are moved to the main-land-of course...
We all could make lots of $$$$ selling 'time-shares-- or-better still- have a fabulous resort spot all to ourselves..
50-100 investors would be enough ...??
C-CS

They can't move them to US Soil without going through the tribunal/trial process and nobody wants to see that happen.

They're going to stay at Gitmo.

Carol, I think you have something there. The rent is only a little over $4,000 per year. The Cubans sure are getting screwed! Castro hasn't even been cashing the checks. The way I understand it, they even have a Starbucks down there.

LL, I sure hope you're right. I mean, what you say makes a lot of sense, but nobody ever gave NObama credit for having any of that.

Average....is there anything obama's SAID that makes sense?
I can't imagine having terrorists living in my neighborhood; this can't happen. The image is great!!

Z, NObama is SO in over his head! That imbecile couldn't run ANYTHING but his mouth, least of all our country.

Have some of those terrorists move into the Lincoln bedroom and break bread with his family. Maybe then he would realize that they really ARE dangerous. It is NOT Gitmo that is the problem with our image of their treatment. The same things will be said about us and them if we relocate them to our soil as is being said now. Leave them where they are and maybe let the red cross visit more often or something. What a jerk, always coming up with these grandiose schemes to fix shit that ain't even broken. What an arrogant asshole! I fell in love with that picture the moment I saw it.

Indeed Joe, best thing for him to do it just drop the whole damn thing, i mean it's not like hussein is stupid enough to just release them. He stuffed up and he might as well tell his nut-base to shove their terrorist-coddling fantasies up their ass. It's not like they're suddenly going to vote for a republican or something.

Love the postcard by the way.

A day in the sun never hurt anyone!

I have a solution... Shoot them all.

It's hunky-dory to break a promise not to raise taxes on middle-class Americans but not to close a prison, when it means dragging them onto American soil, where no one in their right mind would want them.

Broad local support, MY ASS. There was a HUGE public outcry about our illegal presidential primary last year and our lawmakers didn't listen to us then over something as relatively inconsequential as a primary election, so why would they listen to us on anything else? Guvnir Granwhore wants that prison in Standish, as do Crawl Levin and Debbie Stab-A-Ho, because that would mean more federal money and more jobs coming in to Michigan.

I don't want them here. No one I know wants them here. This is just another slap in the face, far as I'm concerned. I'm just a hop - forget the skip and jump - from Standish, which is only a couple hours north of Detroit (where they can be sure to get "broad local support" from their illegal alien Muslim brethren, so tell me they wouldn't LOVE that idea!).

Seems to me obama hasen't made a good decission yet, and I don't think he will start anytime soon. Also I don't think those terrorist are going anywhere, just obama flappin his lips.

MK, the extreme leftards will stay with him no matter what. They may not like him breaking his promise to close Gitmo, but they still won't vote Republican. By keeping it open, he stands to gain big time from people who are sick and tired of his crap. Even I would respect him a little more than I do. I might even be tempted to stop calling him "NO"bama.

No Blog, right, it looks like paradise to me!

Brooke, not a bad idea at all. I'll even pay for the bullets, and I also have no problem being the one pulling the frigging trigger!

Angie Lee, he seems to be breaking all the wrong promises! I don't see broad support anywhere, except maybe Dearborn. It sounds like maybe you live close to there? Sorry, I really do feel your pain.

Old soldier, I don't think that asshole would know a "good decision" if it up and bit him on his ASS!

It was a stupid promise to make, and it was done just for PR. That PR move just doesn't seem to beworking out so well.
He is probably hoping that this issue will just fade from the public mind but the people he made this promise to (the far left) will never let it go.