X.O.T.U.S. (Exterminator of the United States) 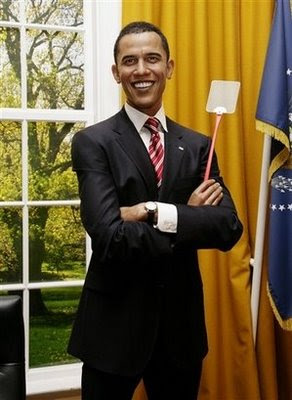 You have likely all seen the gory brutality that the messiah displayed during an interview on CNBC with John Harwood when an uncommonly brazen housefly dared to interupt his swineness. Well, it seems that his dastardly devilish inhumane deed did not go completely unnoticed. The folks at PETA, although generally great pals of the messiah, have not been able to reconcile this act of brutality perpetrated against a member of the defenseless animal kingdom. They have decided to react.

The group People for the Ethical Treatment of Animals wants the flyswatter in chief to try taking a more humane attitude the next time he's bedeviled by a fly in the White House.

PETA is sending President Barack Obama a Katcha Bug Humane Bug Catcher, a device that allows users to trap a house fly and then release it outside.

"We support compassion even for the most curious, smallest and least sympathetic animals," PETA spokesman Bruce Friedrich said Wednesday. "We believe that people, where they can be compassionate, should be, for all animals."

During an interview for CNBC at the White House on Tuesday, a fly intruded on Obama's conversation with correspondent John Harwood.

"Get out of here," the president told the pesky insect. When it didn't, he waited for the fly to settle, put his hand up and then smacked it dead.

"Now, where were we?" Obama asked Harwood. Then he added: "That was pretty impressive, wasn't it? I got the sucker."

Friedrich said that PETA was pleased with Obama's voting record in the Senate on behalf of animal rights and noted that he has been outspoken against animal abuses.

Still, "swatting a fly on TV indicates he's not perfect," Friedrich said, "and we're happy to say that we wish he hadn't."

Deputy press secretary Josh Earnest said the White House has no comment on the matter. 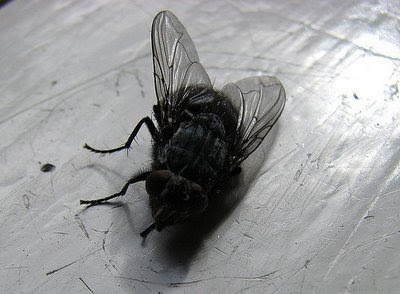 Follow this link to get to the entire story. Please be sure to view the clip at the bottom of the article, especially the end where our dispicable president KICKS that poor defenseless, and probably dead by then, fly under the bus. It is a temper tantrum that you will not want to miss. No wonder the people closest to him are so careful not to piss him off. Is that what REALLY happened to our Secretary of State? 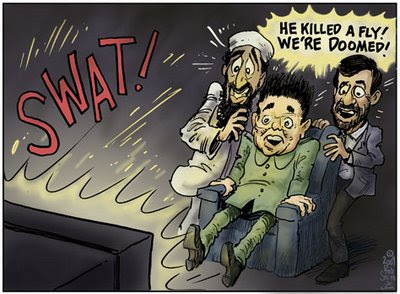 From Glenn Beck, cartoon is by Rob Smith Jr. Thanks for the idea and link Kris.
Posted by Average American at 10:16 AM

He was obviously taking out his subliminal rage against Rush Limbaugh onto the defenseless fly. You know what's funny though about the animal rights crowd and I actually am quite tolerant of them all humor aside and it's this, half of the animal kingdom kills the other half so why go through the trouble of saving every polar bear on the planet when they go about slaughtering baby seals? The Animal Kingdom is ruthless and vicious so it seems to me they don't have a problem with animal on animal crime just if you squash a centipede that was crawling around in your coffee mug (GOD I HATE THOSE THINGS!!)

Flies are disgusting creatures. At least Obama has FINALLY done something useful.

Oh, and PeTa? FLIES are INSECTS, not animals.

It only means that flies and other insects have anything to fear from Obama.

Despots and dictators need not worry...

"PETA is sending President Barack Obama a Katcha Bug Humane Bug Catcher, a device that allows users to trap a house fly and then release it outside."

It wouldn't surprise me if he actually takes that up.

I used to burn flies when i was a kid, PETA will be horrified and will probably call for my execution.

He was obviously taking out his subliminal rage against Rush Limbaugh onto the defenseless fly...lol..great one Joe!

I would be willing to bet that the next time he has an interview we will see that have a heart trap set up to placate PETA. After all he wouldn't want to offend them again.

Oh my fucking gawd, we really ARE doomed as a nation since ANYone ANYwhere provided ANY column-inches to this story.

First, the Obamessiah exercised his awesome power and was able to target the fly with incredible efficiency;

Second, however, he seems to have used his massive amounts of power not for Good but for Bad.

PETA cares more for flies than they do unborn children. Does PETA have any idea how quickly flies would overrun the earth if they weren't overwhelmingly killed.

Z-man, scientists have proven that animal species have been going extinct for millions of years. No big deal. I fully expect that the human species will get it's turn sooner or later, probably sooner.

Old soldier, yup, that about sums him up.

Kris, thanks for the help!

Brooke, I'll bet the "axis of evil" are scared now! What an idiot!

Tom, I would say that insects AND the American people should be afraid of him, but certainly not our enemies.

MK, when I was a kid in school, the flies used to buzz around the windows, almost like they were drunk. I'd catch them and tear off one wing and possibly a few legs just to see them bounce around the window sill. The girls used to get all freaked out. Who knows, maybe one of them started the organization we now know as PETA??

Angel, thanks, but that quote was from Z-man.

Mr Pink Eyes, I would not be one bit surprised, not one bit.

BZ, the media seems to have their priorities all screwed up. PETA can get all the headlines they want, but conservatives, if we get any coverage, it is buried and extremely short and slanted.

David, thanks and thanks for dropping by. Glad you liked it.

Shoprat, I guess they don't realize that they are an even bigger pestulance than the bugs and critters they try to protect. It seems that God cheated the average PETA person. He gave them nice tits, but NO BRAINS!

The line of the day goes to Tom.

You know, watching that video, I'm struck by his execution of that fly being the most decisive thing he's ever done. Took him 10 days to say a tough few words about dead Iranians in the streets of Tehran...but...DAMN...that fly had NO CHANCE.

Z-Man, yes he did peg it right didn't he.

Dr. Dave, you're right. No hesitation, no deciding if was PC or not, just an immediate decision followed by some very decisive actions. I never I thought I would see him respond so well in the midst of such a crisis. I am so glad I have it on film as it is unlikely we will ever see him in such rare form again. To bad he didn't save the moment for a bigger crisis though.

Frank, savor the moment, the media will not show anything more destructive to messiah's character than that.

Angel, I need a little clarification please. When you wrote…”Are we willing to admit aloud that the current “regime” is a dictatorship that needs to be put down like a rabid dog?”… were you speaking about Iran, or America? Just wondering...Iran my friend!..hugs and keep fighting Joe!!!

Angel, I knew that, but it so sounds like America since the messiah took over that I just couldn't resist. You KNOW I will continue the fight!!

Bravo on a great blog.. I loved it

That cartoon is PRICELESS and so true.....That's PROWESS?

Did you catch him make sure his MOUTHPIECE Robert Gibbs had seen it? "you sse THAT, Gibbs?" Ick.

(really glad you commented that you know Obama voters who are sorry they did, but NOW WHAT?)

Wordsmith, thanks, glad you liked it.

Z, I loved the cartoon too. Credit goes to KrisEveland for that one. What a putz huh? He was SO proud. Jerk! Now what Z? now we rally the troops for 2010!