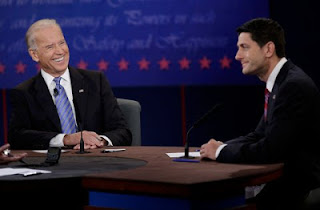 I can't say that I really got any new information from this debate.  The same old talking points from both sides was the rule of thumb for most of what went on.  The debate itself was pretty close as far as substenance, but I gave the win to Paul Ryan.  Why?  Because Joe Biden was about as RUDE as I have ever seen him.  Shame on you Joe!!  Constantly butting in and cutting Paul off during almost every single sentence, laughing during very serious topics, and an assortment of childish words and phrases sprinkled throughout the evening was disgusting and NOT Presidental at all!  Independents, especially the undecided ones took note of that behavior and, in my opinion will let their feelings be known at the polls.  Joe, I have no doubt that you accomplished your main goal, to reinvigorate the liberal base, but at what price?  I fully expect that the evening WILL cost you and your partner in crime come November the 6th.  My guess is that this debate will show up in the polls in the next few days, probably in the 2 to 3% area, and it WILL NOT be in your favor.  That's terrible news for a VP debate which hardly ever really move the numbers enough to even count.

That moron that moderated was worthless  The questions were reasonably fair, but where the Hell was she with all the butting in?  That's HER job to keep that at a minimum and yet she did not once utter a single peep about it.  By some accounts, Joe butted in on Paul EIGHTY TWO TIMES!!  That is just a tad shy of once every minute!!  Heck, he even schushed her one time!  I'll bet it was some kind of a record!  Poor excuse of a moderater in my opinion.

Please feel free to add your 2 cents worth, even if you disagree with me.
Posted by Average American at 6:14 PM

That virtually all of us -- including many LIBERAL pundits -- came to exactly the same conclusions independently is a good sign.

Thanks for doing your part to help in the effort to take out the nation's trash.

I first remember Joe Biden during the infamous Clarence Thomas hearings and he was wishy-washy back then. I'm more of a channel-surfer and don't usually watch these things in their entirety but truth be told Joe was more animated than President Ambien a couple weeks ago.

Thanks FT. I suffered through watching the whole fiasco and managed to not throw anything at the TV! Ryan did as good a job as anyone could what with all the interuptions and goofy expressions he tolerated. Showed America what a class act looks like.

Z-man, can't really say I blame you. It was a rather pitiful display on Biden's part. I'm wondering if maybe some form of dementia might be affecting old Joe. The older he gets, the worse he is becoming. Time for term limits, at least for him. Do you suppose he'll retire from politics when he loses next month?

Good post AA, saw your comment on another blog and th bought I'd come over and take a look. Glad I did

I expect the moderators to get worse in the coming ones, they desperately need obama to live up to the fantasy they always believed so cheating to make that happen is the next thing.

Romney and the republicans had better be prepared for it.

Thanks Darth. I'll be over to check your blog out in a few minutes.

I wouldn't be surprised RWT. Hopefully Romney will be more than up to it. He's quite a debater and under normal circumstances he would kick NOMObama's ass. I expect he will do that even with biased moderaters.

And the moderator let Biden get away with that!

Obama put a target squarely on Hilliary's back. It's gong to be very interesting to see how they respond. Time to pop some corn and watch the fireworks....As for the denial on security requests, Charlene Lamb testified that she turned down the requests, after talking with senior state department officials. That must mean Hillary Clinton or Huma Abedin.

AOW, Martha Raddatz was an absolutely horrible moderator! Ryan did extremely well considering the atmosphere in that room. He did very calmly chastise OLD Joe about the interuptions one time and I think made a great impression on the undecideds the way he did it.

Anita, NOMObama seems to be forgetting that Bill Clinton is not someone you want as an enemy. He helped him tremendously with the ad he made, but he can and hopefully will put the screws to that pompous ass now. You don't throw that man's wife under the bus and not PAY dearly for it!