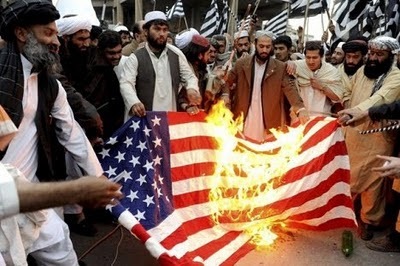 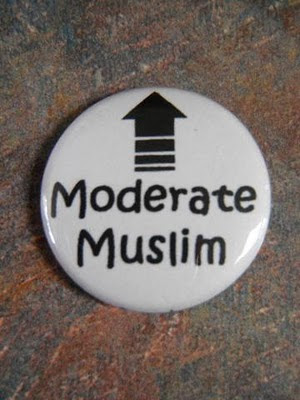 I suppose that we are to believe that the mosque being built at the World Trade Center is being paid for, supported, and promoted only by "moderate Muslims?" That mosque isn't an assault on us, it is not meant to be "salt in the wounds", oh no, it is meant to "heal" the divisions between the faiths. It is a community center for everybody to use. It is a "gift" to all New Yorkers. Anyone believing that truck full of shit, please call me. I have a beautiful bridge to sell you.

OK, so now, if there are any REAL "moderate Muslims" out there, how do they go about proving to us skeptics that they exist? FIRST, and this point is absolutely non-negotiable, you MUST DENOUNCE the portions of your Koran and any other rules you live by that have anything to do with killing non-Muslims. How anyone can call Islam a religion is beyond my comprehension. No legitimate religion calls for murdering innocents just because they believe in a different religion. Pull those pages out and BURN them. Have the balls to promote changing the archaic crap that is holding you in the 13th and 14th centuries.

If you plan on living in the United States of America, you MUST abide by OUR laws, not by that crap you call sharia. Again, this point is non-negotiable! You might as well face it, we believe that women are equal to men. They deserve to be treated like humans, and you WILL treat them like humans here. No stoning and no "honor killings" will be tolerated. Those burkas HAVE to go! Women who might actually want to wear them can wear them inside the mosques or their homes, maybe on their porch, but NOT while driving, and NOT in public places. This is a public safety issue. People robbing banks wear a mask, not law-abiding citizens.

If your religious beliefs won't allow you to fulfill ALL of the duties of a job, don't apply for that job--pretty damned simple!! If you don't want to touch pork, stay away from the butcher shop! If you're going to drive a taxi, plan on picking up anyone who flags you down for a ride, and that includes their pets! Oh ya, and good luck landing a job that will allow you to schedule in 5 prayer calls a day. Get over it! If you think you absolutely have to have a prayer blanket and a foot bath, you better plan on carrying them with you because I do NOT pay taxes just to cater to your religious requirements. We can't put up Christmas displays on publicly owned land anymore, so you can BE SURE that there will be no footbaths on public land either!

Learn and USE the English language!! I will assume you are talking about me or planning a terrorist act if I hear you talking anything else. Speaking OUR language is the first step in assimilating into OUR country. If this is not in your plans, go back to whatever shit-hole third world country you came from!!!!!
Posted by Average American at 3:38 PM

"I will assume you are talking about me or planning a terrorist act if I hear you talking anything else."

I DO think there are 'muslims' who call themselves muslims but don't really read their scripture or want all of the Western world dead.........I have heard one speak, in person, Dr Jaza something or other? A heart surgeon in AZ....and many on TV.
But why don't they MARCH in the thousands to protest terrorism?

amen my friend..truth is considered hate speech ..what an Orwellian world we live in!!

"Oh ya and good luck landing a job that will allow you to schedule in 5 prayer calls a day."

Work with a Muslim guy right now, he'll take out the shawl at night and take his shoes off and pray in the back but he makes sure all the work's done first. We're a tolerant workplace but even so I wouldn't get used to it if I were him and do this at every job he'll ever get in his life. Little problematic.

"Learn and USE the English language"

Work with some Italians right now, quite a few in fact and they're always jibbering in the back in Italian and it's usually some top-secret conversation they're having so it's not just the Muslims. Sometimes the Spanolias do the same thing but in my place it's mainly the Italians. Actually sometimes I can't even understand them when they talk in English 'cause of their thick accents which in one woman's case I think is really put on like she thinks she's Sophia Loren or something.

I got 2 emails today telling me that Michigan now has "For Arabic, press 3" I hope that's not true, but the documentation looked real.
And, I'm hearing that they immigrate here with 3 wives and live on the dole here...we provide FOOD ASSISTANCE in ARABIC now in Michigan.....
and the women live as the wife, the sister and the mother of the MAN on assistance.
Our tax dollars at work, huh?
\
Whatever happened to what MY relatives, the last of whom emigrated in the sixties and seventies. heard? "Do you have relatives willing to support you in America if you can't find a job...and can you prove that??" those were the days.

German friends of mine and my husband's spent FIVE YEARS going through red tape to get here and they brought money and JOBS when they got here! unbelievable.

No Z, it's not unbelievable. It's progressive. We're going to Hell in a hand-basket and the only ones who care are us "racists."

I am so glad that I will not still be here in 40 or 50 years. Stop and think about the world's population as it stands right now. Realize how fast Muslims are moving around, getting strong foot holds in every country on the planet. Now factor in a birth rate that makes us Christians look like we don't want to propagate. Muslims will be able to use our own laws and ballot boxes to take over without firing a shot. Still think there are "moderate Muslims" among us? They are the "worker bees" of the hive. They don't have to do the fighting, but they are the ones that will end up defeating us. The ones fighting us, blowing themselves up, and flying planes into towers are just a smokescreen to cover the real plan.