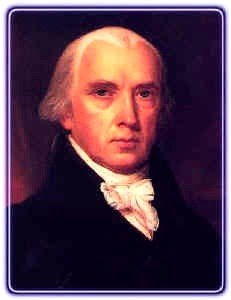 "There are particular moments in public affairs, when the people stimulated by some irregular passion, or some illicit advantage, or misled by the artful misrepresentations of interested men, may call for measures which they themselves will afterwards be the most ready to lament and condemn."

Let's pick that statement apart and discover what it means in todays terms. There are particular moments in public affairs(Presidential election of 2008),when the people stimulated by some irregular passion (a burning desire for positive change), or some illicit advantage(lop-sided media coverage), or misled by the artful misrepresentations of interested men (lied to by NObama and his campaign staff), may call for measures (voting for NObama)which they themselves will afterwards be the most ready to lament and condemn(buyers remorse).

I never realized that President Madison was a fortune teller. He sure did predict the scenario we are currently living under. If you buy something and then later realize that you screwed up, you can always sell it and chalk up the loss as an expensive experience. A minor setback, usually with only temporary consequences. Electing the wrong person for President, especially this year, would have drastic and long term consequences for every single American and the world. There is no room for buyers remorse in this decision. Do not buy the sales pitch just because it was so eloquently delivered. Let your friends know how important this one is. You all have an abundance of information to share---share it! I plan to fight to the LAST moment. I will be spending Tuesday out in front of my ward's polling station doing the best I can to get a few more votes.
Posted by Average American at 5:48 PM

It's like a blogger told us today about a decision that was made to expand the welfare base back in the 80s (thanks to democrats obviously) and how you folks are still getting bitten in the ass for it all these years later.

Choose wisely America, because there are no refunds, can't declare bankruptcy and walk away, can't return the goods, no repossession applies here. You make the wrong decision, you'll have to suck it up and cough up for 4 years and beyond.

James Madison?
"In a letter to James Madison in 1785, for instance, Thomas Jefferson suggested that taxes could be used to reduce "the enormous inequality" between rich and poor. He wrote that one way of "silently lessening the inequality of property is to exempt all from taxation below a certain point, and to tax the higher portions of property in geometrical progression as they rise."
Madison later spoke in favor of using laws to "reduce extreme wealth towards a state of mediocrity (meaning the middle) and raise extreme indigence towards a state of comfort."
...Yes, ol James Madison. :)

MK, we'll know soon. I still have confidence in the American people. The polls actually got better today for the electoral votes. A few more states switch columns and we'll be good.

BB, nobody begrudges helping people who need it because of circumstance. We, or at least I, have a real big problem shelling out hard earned money to support lazy bastards who won't even try to support themselves. There is a BIG difference, and if you can't see that, then by all means, vote for the Socialist!

I guess you would have voted for Charles Coatsworth Pinckney in 1808, then? Just pointing out the disparity of opinion, even in just one founding father. Small wonder we Americans can't seem to get along with each other. No, I will not be voting for the Socialist candidate, Brian Moore. :)