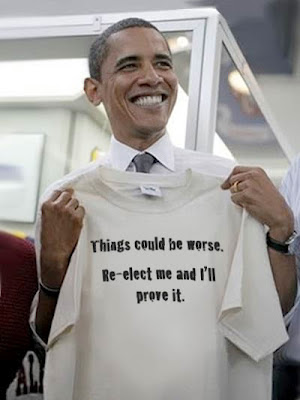 Do you remember when all the rage was "affirmative action?" You remember, the program that forced employers to give jobs to less qualified individuals just because of the color of their skin or their sex? Remember the "quota system?" Did you ever lose a job to someone else, even though you were much more qualified, just because of their skin color or sex, or for any other PC bullshit reason just so the employer could meet their "quota?" Right, the bleeding heart liberals, now more often called "progressives" devised that system, "Alternative action" to "level the playing field," for disadvantaged Americans.

Why am I bringing this up? Because, I submit to you that this is the EXACT REASON we have had to put up with an inferior President for the last almost 4 years. Barack Hussein Obama (NOMObama) was MUCH LESS QUALIFIED than his opponents in both the Primaries and the General Elections in 2008 AND in 2012. The news media NEVER even tried to vet him like they did EVERY other candidate, regardless of party. Not a word about all the sketchy characters in his past, and worse, that he is still surrounded by. There was a veritable Army of thugs, Marxists, Communists, Terrorists, and Slimeballs that NEVER even got mentioned.

The news media in this country TROUNCED on Sarah Palin for her "lack of experience" but he was fine? He had a LOT LESS experience than she did, AND she was running for VICE President, unlike him. He had "The Audacity of Hope" of becoming Numero Uno, and he did. To this day, the lame stream media protects his ass by not asking the hard questions, by lying for him, by covering up or not reporting news that SHOULD be reported. The latest incident was Bengahzigate, but there were COUNTLESS other things.

He did not and could not have won with African American votes alone, even though he did get close to 100% of them. Millions of White Americans voted for him also. Just the overwhelming desire to finally prove that America had put race behind us, at least for the most part, drove them to overlook the lack of vetting and the complete inexperience of the man. It was almost like many people voted for the color, not the person. Call that racist if you must, but anyone with an HONEST bone in their body will know that I am correct.

Let's face it, NOMObama was held to a MUCH LOWER STANDARD than any other Presidential hopeful in my lifetime, and I am 64 years old!    The bottom line is this, BARACK HUSSEIN OBAMA WAS AND IS THE AFFIRMITIVE ACTION PRESIDENT!!!
Posted by Average American at 12:12 AM

With any luck at all, we'll be able to put our backs to these past for years and this ObamaNation

Let's hope so LL. I think we have a real good shot at it this time. Thanks for dropping by.

Let's face it, NOMObama was held to a MUCH LOWER STANDARD than any other Presidential hopeful in my lifetime, and I am 64 years old!

Really? Where was your "indignation" when Romney (the anti-Reagan progressive leftist founding father of gay marriage and taxpayer subsidies for abortions) was spending $2 million a day smearing Newt Gingrich as a "progressive?"

You don't hate Obama's politics, you hate his party affiliation. You want everything you're getting from Obama from a Republican instead.

THAT is why you support Romney.

Furthermore, I know a lot of people who voted for Obama in 2008 to prove to themselves that they weren't racists.

Obama fell flat as he tried to make fun of his first debate, and hopefully he will be fully exposed on tonight's debate....go Mitt!

I too know quite a few former NOMObama voters who have since suffered a severe case of buyers remorse. Hopefully, AOW, there will be enough of them to make the difference. I believe there will be.

RR, watch for some serious blood-letting tonight. It will be BRUTAL! We'll be lucky to hear much of anything of substance over the roar of the interuptions. They really do need sound proof boxes with mics that only get turned on when it is their turn to speak! That would be the best gift the electorate could ask for.