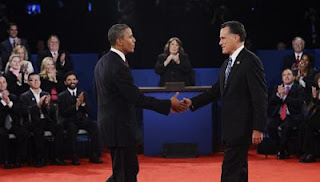 The second of three Presidential debates is over and done with and destined for the history books.  That does not in any way infer that it won't be the topic of the town for the next few weeks.  The pundits are already abuzz with their particular slants on the results, but here is MY take on the matter.

As expected, NOMObama did a whole lot better than the last time.  I was also right about Romney doing only somewhat better than last time.  After all, he had a much higher bar than NOMObama had going into this evening's round.  Both men came out swinging and never let up, surprising most of the pundits who had looked for restraint in this "townhall" format.  Man, were they ever wrong!

Candy Crowley was very evidently biased to NOMObama's side for the first 1/2 or 2/3 of the debate, but, actually went the other way for the last portion.  The total time used by each man was only 3 minutes different, with the President being the winner of the extra time.  All in all, I was pleasantly surprised that she was not as one-sided as I had expected.  The main exception was what the President said in the Rose Garden concerning the Bengahzigate affair.  He tried to BS his way out of the mess HE created by saying that he called it terrorism that day, and Crowley backed him up!  WRONG!!!  Fact checking proved he was lying.  He did use the word "terror" but it was not concerning that incident!  Crowley and even Anderson Cooper later confirmed the fact checking went AGAINST NOMObama!  I wonder how much coverage THAT disclosure will get in the lamestreamenemedea..??

All in all, the evening was won by Mitt Romney, albeit not as huge a win as the last time.  My estimate is that it will tack on another 2 or 3 % to his polling numbers.  You will see him closing the gap in more states and also will see a few more states in the RED COLUMN!!

If NOMObama doesn't find a way to cancel the last debate, watch for some blood letting as the gloves will come off next time!  He has got to be getting the message, FINALLY, that he is LOSING!

Posted by Average American at 7:16 AM

good analysis, AA.
I thought Romney did worse than most did, apparently, so I'm very happy about that (that I was wrong).
I could barely listen to Obama, I almost turned it off early-on because the lies were so obvious and so effective. DARN!

I fear for my television set. I may not watch the third debate because I came so close to throwing my drink at it this time. I'd hate to wreck a perfectly good $800.00 set because of that asshole!

Agree and I think in the next debate you'll see even more bias in the moderator towards obama.

The press desperately want him to win. The cost to America as a nation, to your children and the world is of little concern to them. They want their false messiah to remain for another 4 years.

Yeah, they "want" him to win. My message to them: It SUCKS to want!

It looks more and more with every new poll that he is DONE! Good riddance to bad rubbish!

Because of Obama and his so called Secretory of State, and UN Ambassador, we have 4 dead Americans, the American flag is down in Libya , the al qaida's is up in Benghazi,

Obama should take responsibility or resign!

No way he will resign, but we CAN FIRE HIM! I believe we will do just that!