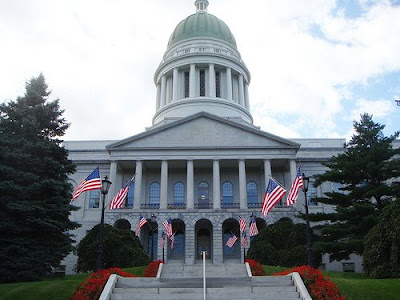 File this one under "I thought I'd seen it all!" The State of Maine will be voting on whether or not to allow "noncitizen residents" the right to VOTE in their municipal elections. Now, I'm thinking there HAS to be something illegal about this plot, there just has to be. I think the people behind this effort believe they are only talking about LEGAL noncitizens, but who is going to make sure that a person is legal (can't racially profile them, now can we) when they pop in to cast their vote for, as example, a much bigger school budget because they have 17 kids? How about enough Muslims move into a community and decide they want Sharia law? The sky would be the limit. Very dangerous waters here my friends! Here's the link to check it out for yourselves.

Keep an eye on this new nonsense. If the dummycrats over there in Maine are successful, you can bet this shit will spread like wildfire! I would also bet that this crap is heading toward a country we all hold dear too, America. But wait, doesn't the United States Constitution have something to say about this? Why, yes, I believe it does. Yes, here it is, AMENDMENT XIV;
Section 1. All persons born or naturalized in the United States, and subject to the jurisdiction thereof, are citizens of the United States and of the state wherein they reside. No state shall make or enforce any law which shall abridge the privileges or immunities of citizens of the United States. By watering down my vote with votes of noncitizens, my rights have been "abridged", or lessened. We shouldn't even have to be defending against shit like this. What more stupid insanity will the leftards dream up? Will I EVER be able to stop saying "I thought I'd seen it all?" Will the leftard's "roosters EVER come home to roost?"

That beautiful picture at the top of the post is the Maine State House up in Augusta, Maine.
Posted by Average American at 11:26 PM

That Maine State House is beautiful on the outside. Too bad it's rotten to the core.

this is one of the results of declaring and believing the Constitution is a "living document", my friend.

"What more stupid insanity will the leftards dream up?"

Wait and see Joe, they're just getting started.

"Will I EVER be able to stop saying "I thought I'd seen it all?""

Nope, perhaps if you're looking for some good policy from the left, you'd have to stop. Mate, give these bastards enough leeway and they'll legalize pedophilia. I'm quite sure of it.

"Will the leftard's "roosters EVER come home to roost?""

They always do Joe, the consequences are felt far and wide and for decades if not for ever, it's just that it's not those morons who have to suffer them. It's the rest of us that pay for it.

The left will never stop trying to give the vote away to every clown who shows a good chance of voting democrat. The only way they'll stop itching to give everything that you folks fought and worked for will be if these people vote for the Republican party. Then you won't see their yearning for spreading the vote and wealth around evaporate any quicker.

There really is nothing to add to your post. This is disgusting.

Dumb. If it gets to a vote, it won't pass. If it passes, the courts will strike it down. One wonders what the non-resident population of that little state is, and why it is considered important enough to vote...

Oh my, I never thought I'd see the day. This just speaks to the libs desperation for more votes.

Sharia over my dead body!

What do Demorats want?

AA,
I guess we should let pets vote too. I'm sure BO the dog is a dem. Geez, makes you wonder if it was worth risking it in SEA, huh?

1. It isn't Maine's fault. They just happen to be situated too close to Vermont and French Canadians.

2. LOT, my Shitzu has voted in several elections, effectively cancelling out the votes of my Chihuahua (who I suspect is an illegal alien). Don't knock voting pets until you take a closer look at the benefits.

3. Now it is time to consider federal funding for the world's largest mosque in Maine; it will act as a magnet to all our domestic Islamic terrorists and the end result, simplified targeting.

I will be pleased to accept your nomination of a Nobel Prize ... for something.

AA, Now I know how some of my blogger friend from California feel when "everyone seems to be against us".....I am a resident of Maine......And proud of it. I can't say I am proud of who represents us, or doesn't represent us elsewhere, and I haven't heard about this. I do know we have a large population of somalians in Lewiston....but aside fromt that, I was traveling last year and went to an out of the way place for antiques....While in the back shed a foreigner waited on me who spoke very little English. I asked him where he came from and he said something I didn't understand. I just said OK thanks.....but we do have them all over Maine, I guess, but, no one is asking. I'll look into the voting bit and Blog something later, that is if I some information......Take it easy on me......

PCC, yup, that about sums it up.

Griper, living would be one thing, but damned it sure is down right lively these days. Seems like it changes daily!

MK, Reports of a very successful tea party tax day are filtering in. Maybe there's hope yet. Sure seems to be a lot of pissed off taxpayers out there.

Chuck, you sure got that right!

BB, I hope it gets shot down right off. I hate to even see dumb crap like this.

Kris, the left never met a tax they didn't like or a voter they couldn't buy.

Brooke, I'm with you.

BZ, yeah, I guess I shouldn't have been so surprised by a move like this.

You can bet we would be supporting more than one dog if that were the case!

Mustang, I'll need a little time to consider that, but you may have a shot at the nomination.

Tapline, I've heard that Lewiston is LOADED with Somalians as of a few years ago. Wonder how the townfolks like their new mosque?

I haven't heard about the mosque, but I'm sure they will accomodate the newcomers......stay well.......

Tapline, I don't know if they actually have one, I was just being sarcastic. It wouldn't surprise me if they do though.

There was a state senator in Massachusetts who wanted to grant illegal aliens in Massachusetts voting rights also, I forget her name. But it was stopped, at least for now. But we know it will be back, they never give up.

Mr Pink Eyes, I find it absolutely disgusting even thinking about giving the vote to any one who is not a citizen, legal or illegal. As far as I am concerned, those who are promoting this should be thrown out of office, not by the ballot box, but by immediate impeachment.