After less than a week in office, Barack Obama's approval rating plunges 15 points (as of Jan 26th) 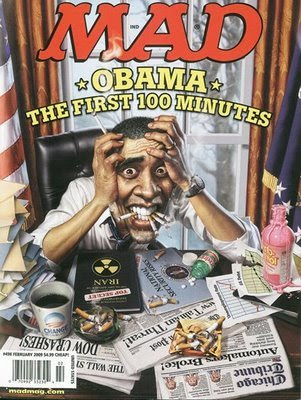 Barack Obama might have been in office for less than a week, but the euphoria is beginning to wane.

The new President's approval ratings have fallen from a stratospheric 83 per cent to a more modest - although still impressive - 68 per cent.

Washington analysts said the scale of the drop in the Gallup poll underlines the immense challenges Mr Obama faces in trying to turn round the U.S.'s battered fortunes.

He still remains vastly more popular than his predecessor George Bush - who left office with around 25 per cent approval.

Mr Obama is facing an ugly battle with Republicans over his plans to bail out the economy with £515billion of taxpayers' cash. Opposition leaders claim the rescue package relies too much on government spending and not enough on tax relief for families and small businesses.

In a radio address at the weekend Mr Obama gave details of his plan for the first time, saying he wants to double the nation's use of wind and solar power within three years and modernise 10,000 schools to help combat the 'unprecedented crisis' faced by the country......

But the President's top financial adviser Larry Summers, head of the National Economic Council, risked angering Republicans last night by refusing to rule out yet another influx of government money to prop up the ailing U.S. banks.

He said: 'What ultimately will be necessary is something that will play out over time.' Mr Obama's hopes of enacting the bailout with bipartisan support next month appeared to be fading last night with Republican leader John Boehner warning that his party could vote against it.

Senator John McCain, Mr Obama's opponent in the November presidential contest, also said he did not believe the package did enough to create jobs.

'There have to be major rewrites if we want to stimulate the economy... As it stands now I can't vote for it,' McCain told Fox television.

The President's new focus in the war on terror is also causing controversy......

Vice President Joe Biden warned that Americans should expect casualties as up to 30,000 more U.S. troops are sent there to fight the resurgent Taliban.

HA, can you say BUYER'S REMORSE? It's starting to settle in already. Wait until his cult followers find out they won't be getting all their bills paid by the government, and they won't be getting a new car and that $50,000 per child they were hoping for either. They're getting their change---as in he "changed" his mind. What knuckleheads! Who wants to start a pool on the date that his ratings go under 50%? I'll take April 15th. Oh, and his ratings are down ANOTHER 3 TO 5% since this story was written! Maybe I should take Feb. 15th. Way to go NObama.

You can find the entire story here along with an article, complete with some cute pictures, about the NObama girl's dolls. Oh, is Michelle PO'ed!
Posted by Average American at 6:49 PM

Congratulations on a wonderful blog AA
I love it

I am not taking you up on that approval rating under 50% bet, because no matter what, we are ALL losing, big time, with Obama in office.

Yeah Beth! Look at all the jobs created by the Bush tax cuts. Once they begin to take effect think of all the growth we will be enjoying. Don't worry about the 2 million plus jobs that were lost under Bush. That was just the economy bracing itself for the unprecedented growth. Yeah that Bush and those great tax cuts and all the wealth we're gonna enjoy. Happy days will soon be here.


I'll try to behave myself so you don't ban me like the Professor did AA. "Myself" is correct. You run a fine blog.

Myself, thank you so much for the compliment. I just hopped over and checked out your blog. Very nice.

Beth, I don't blame you. I'm sure it will go below 50 and it won't take to awful long. Druggies, criminals, and deadbeats won't lose anything, but we working stiffs are in for a real rough ride.

Truth, as long as you continue being considerate and civil you will be welcome. We can agree to disagree, and you do seem to agree with the right side every now and then. There is hope for you yet.

Maybe they can take the proceeds from those dolls to help PAY FOR SOME OF WHAT OBAMA WANTS TO DO?

Were GARDENERS lobbyists, too?

Ya, Blame Bush...He was warning about Fannie and Freddie while Daniel Mudd was telling the Black National Caucus they were the 'conscience of congress' and minorities would get loans... And now those same poor minorities (and others) are out on their rears with no home...AND no job.

And THE ONE is going to SOLVE IT!!!
Let's get his tax delinquent Sec of Treasury to help. I love the left's "Well, he DID pay once he was nominated!" Ya...nice.

Buyer's remorse, indeed! Leftists are going to be in for a HUGE letdown!

The RCP Average poll for the period from Jan 21st until Jan 29th has NObama with an approval rating of 61.8%. Buyers remorse is having a negative impact. here comes 50%! The party is almost over mr. messiah.

Z, it looks like there are a few people who have managed to ween themselves off of the koolaid. Lets hope this trend continues.

Brooke, can you say "LOOK OUT BELOW!!"

America's economy will plummet because the "Emperor has no pants!" Obama will not come through and will really see what he is about. We've lost what, close to 1 million jobs in the first month of his appointment. Add 2 million more before Independence Day, and his approval rating will be at 43%. Why 43? Because people will realize that while Bush made many blunders, it was better to have him in office than the flighty one we have now.

Neo,Soc, July huh, you give him more credit than I do. I do hope that things start picking up, and that I am wrong about him and his porkulus package, but I doubt I am. The dems in Congress are loading that thing down with so much bullshit, that it just can't float.

Angel, I'm pretty sure I'm right on this one hun. Leftards are losing their jobs to. It won't be long, you will find it much harder to find people willing to admit that they voted for him. (hugs back)

This'll be a full blown return for an exchange, this time for real president and not some made for TV sitcom star like Obama really is.

He belongs on the WB not in DC AA.