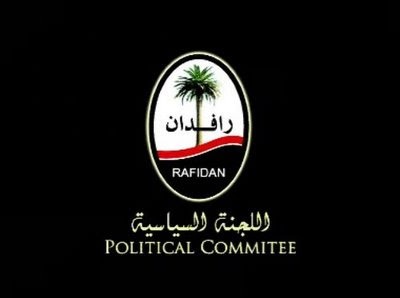 The following LONG-WINDED letter from Rafidan Political Committee is in response to NObama's speech of Feb. 27. They do pretend to have balls, I'll give them that! Have fun, see you in about an hour!

Good Evening,
In Respect to the remarks of President Barak Hussain Obama, The president of the United States of America. The Political Committee of a number of factions in the Iraqi Resistance, mainly the factions present in our front, respond with our point of view on the contents of his speech.
Over the last four months, as the battle of our people continues to free Iraq of all foreign occupation. We have been studying the movements on the ground as well as analyzing the intelligence in order to assess the next strategy that the US administration will take under the leadership of the new presidency.
We had formulated our own plan of action based on the above mentioned, but have chosen to give the new president enough time to gather his thoughts and have a suitable amount of reports & briefings that would give him also a good picture of the daily developments on the ground.
President Obama, After listening to your speech on the 27th of February 2009, in which you declared your general and public understanding of the ongoing war against our people, and gave your military and the honorable people of the United States brief points on your intentions in our country, we felt the spirit of the speech that your predecessor President JFK gave on the 20th of January 1961, on his inaugural address. In this speech, he offered a turbulent world, a way out of tensions and paid with his own blood for challenging the interests of those in your consecutive governments who hold the true keys to power. Those who would do anything to preserve their interests, wealth, & power to create wars & conflict.
We mention this with great honesty in hope to spread awareness and remembrance that a new Caesar may be betrayed, by his own, if he chooses to follow a different path. We do believe, on the other hand, that the spirit of the speech was well chosen.
We have listened well to your economic plans for your country released before this speech as well, and as ambitious as it may seem, we believe that if intentions are genuine within your congress, a considerable number of what you seek will eventually be fulfilled, but in case of failure, the republicans will be looking for a scapegoat to relate all their failures to. In this case it would be your administration. This will guarantee them a fast comeback.
You have inherited a nation at war, a failed economy, and a desperate people who are bearing the full brunt of an economic crisis that was not of their making. As well as thousands of young men dead and handicapped.
We have inherited a foreign occupation, endless counts of innocent dead, injured, and handicapped, millions of refugees, in essence, Mr. President, the complete and planned disintegration of our nation and people.
We believe that the funds wasted in this war would have been more useful if it were spent on research to develop alternative energy, which no doubt would have reduced energy conflicts, cures for cancer, agricultural solutions to prevent worldwide poverty, advancements to develop Africa, where people still die of starvation and intentional neglect. Endless causes, all in need of immediate attention.
By the will of God almighty, the resilience of our men, and the patience of our humble people, we have so far managed to halt and render useless all imperialist agendas set for Iraq and the region in whole. Simply by choosing to resist occupation, a right guaranteed by God first and then by international conventions to all men. A right your country’s policies continue to disrespect and dishonor, in clear example to state sponsored Terrorism.
You have spoken to our people in part of your speech, and we thank you for these words, you have displayed a far better understanding our nation, than your predecessor, who preferred to dive deep into the oceans of illiteracy and ignorance. Despite the fact that you did not mention the Iraqi resistance in your speech, and chose to label us as terrorists along with those who arrived with your troops, we will set that aside for now, and mention a few facts for the record.
1- The people of Iraq whom you addressed, in all their sects colors and religions, refuse your occupation, and those who accept it, are those who benefit from it.
2- The Iraqis you addressed, as we truly hope, are not the ones who bathe in the riches of treason, behind your walls of the green zone, nor are they the likes of Ahmed Al Chalabi, whom your previous government conspired with and his likes from the dark alleys of 5 star hotels in the US and Europe prior to your occupation.
3- The Iraqi people you talked to, are those who never invited your occupation, and were trying their best to survive on what was possible, under the criminal sanctions that went on for 13 years only to be crowned with a foreign occupation, unmatched in criminal acts, in today’s modern world.

Posted by Average American at 6:57 PM

never negotiate out of fear..sure..tellthat to HUSSIN O!

These morons actually make Obama look almost humble. Can anyone actually be that clueless.

I don't know what else to say.

Do any of you think Obama, or anyone of good sense that wasn't paid to read that crap, actually read all of it?

Angel, eventually, I think even he will figue it out. Hopefully before to much damage is done.

Shoprat and MK, he and a lot of other liberals really think that these radicals can be reasoned with. Why they do is WAY beyond me.

Brooke, I know just exactly how you feel.

Truth, I did. I don't usually get such a good laugh from the "dark side." I also hope our secret service or someone from intelligence read it in case there were any hidden clues in it, but of course they would have been paid to.