America does NOT have the worst liberals 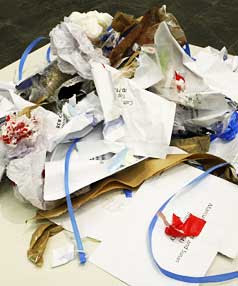 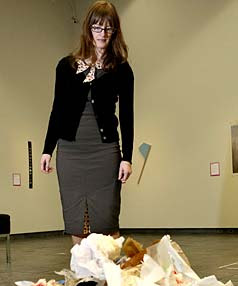 This article came from stuff.co.nz. Here's the link, but the entire thing is right here. Hat Tip goes to my friend MK from Australia who got it from Crusader Rabbit. I think I might have just acquired a new appreciation for our home-grown liberals. As far as I know, other than maybe PETA, they are not as bad as the crop in New Zealand. I feel really bad for the normal Kiwis, it must be Hell living on that small Island with people like the ones in this article.


Art buffs have trashed the pile of rubbish which won this year's
Waikato National Contemporary Art Award, describing it as
embarrassing for the community.

But Waikato Museum director Kate Vusoniwailala leapt to the defence of judge Charlotte Huddleston, saying it was "an excellent decision" which had helped achieve the objective of getting people talking about art.

Berlin-based Dane Mitchell picked up $15,000 for his entry, Collateral, which consisted of the binned wrapping from other award entries tipped on to the floor of the Waikato Museum, in line with his written instructions submitted to gallery staff.
He had not seen his entry when it won.

However Mark Hayes, who built a sculpture for the award, entitled Domestic Violence is Not Okay, was unimpressed.

"If I had known that the contents of my rubbish bin would make the winning sculpture I would not have spent 26 hours cutting, welding and grinding," he said.

"Contemporary art needs to say something to you and make you think. I am sorry but I just cannot see the 'clever' and 'cheeky' in the winning sculpture. Is someone trying to make Trust Waikato look like a joke?

This was Trust Waikato's final year of award sponsorship.

Hamilton artists Collette Fergus and Bruce McLachlan said the winning entry was "the worst yet".

"A pile of rubbish that wasn't even created by this guy is worth $15,000?" said Ms Fergus. "That is insane. Do the other artists whose names were in the pile feel okay that this is clearly mocking them and their entries?

"What was the judge on when she chose this; awarding that sort of money for a piece of art mockery that does not even deserve the title of art? She has clearly lost the plot."

Ms Fergus accepted that unusual and provocative art was expected at the Waikato Contemporary Art Award.

"We however feel that perhaps they should remove the word art from the title of the award. This pile of rubbish is not art and this is not an award for artists. It's a sad mockery of us all and an embarrassment to the arts community."

But Ms Vusoniwailala was delighted with the level of public interest
being generated by the award.

"If we are having a lot of conversations about the award, we are achieving an objective," she said.

"There will always be people who love things and those who hate them. The bottom line is we always ensure the judge we select has an excellent reputation.

"She (Ms Huddleston) has been fantastic to work with, very professional, and has put together a stunning show, and a significant show for New Zealand that has shown this city has come of age."

Morrinsville women Heather Oleson questioned whether the winning entry had complied with the rules and was eligible.

"Who is the celebrating artist/winner here?" she asked. "Is it the
museum staff who created the entry, or is it Mitchell who gave the instructions?"

She noted the awards criteria required the work to be the artist's
own, with one digital photo of the work included, and artwork not permitted to be "altered" after being submitted.

Posted by Average American at 8:00 AM

Sometimes it seems like the world is just going down the drain, especially when you see this sort of stuff! But then I see my blogosphere friends and know there are reasonable people out there who think normally!!

What? You don't see the beauty in the trash display? You must be closed minded. You just don't understand what the artist was trying to say.
Who am I kidding? This just shows us the type of wackos that are out there. Thankfully this did not happen in America, but it probably will someday.

That must mean that all the closed, rusting plants across America are eligible for funding from the NEA for preservation...and we should include the dumps as well...

NEA-taxpayer (that means us)funded "art" ...
'Piss Christ' comes quickly to mind...
There was a move to repeal NEA's funding-no strong support on the part of our Republicans...so-we pay and pay...
Carol-CS

Thanks for the link back Joe, it is a bit crazy, i couldn't believe it at first either, but it's for real.

Beth, if art is supposed to create conversation, then maybe this one should have won, because it did that.

MPE, this could just have easily been here, we have whackos too. Just look at PETA.

Tom, dumps for sure, plants----not so much, unless the rusting steel forms an interesting pallette.

Shoprat, what a waste of a good can of trash.

Carol, I guess we taxpayers shell out for everything elso weird, why not this. A disgraceful mess this country is going through, I hope it doesn't get to much worse.

MK, I actually had this ready a few days ago, but had to postpone posting it because of 9/11 and then the ACORN thing. I just had to spread it around, it was to funny not to.