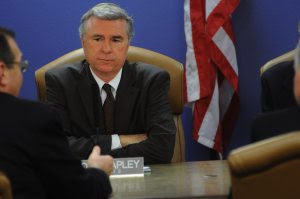 Indicted Maricopa County Supervisor Don Stapley has been appointed by the White House to a task force to help implement the economic stimulus package signed last month by President Barack Obama, and wants a judge's permission to travel to its first meeting next week.

Stapley's lawyers filed a motion Tuesday asking that he be allowed to travel March 17-19 to Washington, D.C., to attend the first meeting of the task force.

Stapley must get permission to travel out of state as a condition of his release following his indictment on 118 criminal charges, which was announced in December.

Now, this article was posted on March 10th. As B A D as it is, things get a whole lot worse! The following day, March 11th, the story gets "tweaked" a little bit. Here is the "rest of the story!"

Indicted Maricopa County Supervisor Don Stapley was not appointed to a special task force on the implementation of the federal economic recovery plan, despite a claim to that effect made by his lawyers in a court motion, a White House spokeswoman said Wednesday.

Stapley's attorney, Paul Charlton, said there was a mix-up in terminology and acknowledged the supervisor has not been appointed to a task force by Vice President Joe Biden, as was claimed in a motion filed Tuesday.

However, Stapley was asked to participate in a meeting next week in Washington, D.C., to discuss the implementation of the economic recovery plan signed last month by President Barack Obama, Charlton said.

"He was invited to participate in something called something other than a task force," Charlton said Wednesday afternoon, after the White House denied Stapley had been appointed to any committee by the administration. "That was Don's understanding of what the group was going to be called, but we're clearly going to agree with whatever the White House is saying it is. Don has decided to withdraw from participation in that group, whatever it's called, because it's become too much of a distraction."

A great big hat tip to America's Watchtower for this prime example of Nobamanation at work. I mean, really, I thought I had seen everything, but I was wrong! There are two links you have to follow to see the whole story, including how Sheriff Joe Arpaio fits into it. The first article (March 10th) is here, and the second one (March 11th) is here. Have fun!
Posted by Average American at 1:29 AM

AA,
On top of everything, did you hear that Sheriff Joe is under investigation by the Federal Justice Dept. for enforcing immigration laws? Here we go. BO and his government are going to be the most activist and worst in history. We can say "I told you so."

And these idiots called Bush unethical. Has Obama appointed anyone that did not have a cloud over their head.

We had the same thing here. We had a Dem COunty commissioner, not indicted but convicted, of assault during a sexual tryst. Two days after the conviction the county was going to pay $1300 for him to travel to a conference.

Israeli and American politics are truly not so different. Lie and capitulate and expect a different result. I should write a book called "Politics for Dummmies."

Thank you for visiting my really newbie blog. I only began two days ago because I was sick of all thee whiners and chose to be pro-active instead of inactive.

I have added you to Daveed's Links. I shall re-visit your intriguing blog.

LOT, yes, I did hear that and I find it disgusting. The man deserves a medal for what he does!

Chuck, if he did it certainly wasn't many. It seems as though if you're not a criminal, you're not invited to the party.

Zeeva, welcome to my abode. Good luck, especially the pro-active part. Most of us bloggers do whine and bitch quite a bit, but our function, as I see it, is to spread the word about what's on the other side of the coin from NObama. The MSM does not and probably never will tell the whole story. We bloggers try to fill in the gaps.

The way I’ve got this Obama gig figured out is that tax evasion, fraud, or perjury entitles you to a cabinet post, indictments equate to ambassadorships, and federal investigation will get you a seat on a council or committee. So then, according to the logic table, shouldn’t Madoff at least become Fed Chairman?

Average, I BURST into laughter at the first paragraph, then read it to Mr. Z and we BOTH burst into laughter.......what the.......??
Now, I see Mustang's suggestion that Madoff become Fed Chairman...WHY NOT?

On the other hand, this is our country...oy. What the HECK happened?

Beth, thank you and most definitely yes, we bloggers HAVE to pick up MSM's slack. We have to spread the word around on topics they either will not talk about, or if they do, it gets the back page.

Mustang, YES, Madoff for fed chair. I hadn't thought of that, but it makes sense in a perverted way. After all, who knows the ins and outs of our financial system better than him? You just gave me my laugh for the day! Thank you.

Z, those competing articles actually were VERY FUNNY. It is absolutely amazing how STUPID some people can be.

"He was invited to participate in something called something other than a task force."

Now, THAT sentence says a LOT about the author, doesn't it?

Is there anyone in the Obama administration that hasn't got a shady past?

Thought we'd seen it all, i fear this is just the tip of the iceberg folks.

Isn't it funny how many things turn full circle, as in one former president saying: "It all depends on what your definition of 'is' is."

These are the same people that think a budget CUT is when you don't add MORE money from the last year's budget.

I thought I had seen everything, but I was wrong! ...yup..hate to tell ya hun but WE AINT SEEN NNNOTHIN YET!!!

Look for anyone who disagrees with Obama to get a visit from the IRS or worse, while those that do his bidding get a free pass.

MK, no, I don't think so, at least not in the high profile positions. Just a bunch of crooks and creeps.

BZ, "is is", "something other than something", "misspoke", every frigging idiot in that party thinks we are stupid, and maybe the collective we is stupid for putting up with all this bullshit. I see a revolution in under 4 years. I feel stronger every day that we can not avoid one.

Angel, it is to the point that absolutely nothing they do surprises me any more.

Brooke, maybe that is why I got audited a few months ago. The messiah didn't like my supporting John McCain and dissing him.

When your a liberal Democrat everything else is forgiven.

This just goes to prove what I have been saying for years, "the Democrat Party is the most immoral and unethical Political party to come down the pike in this country." But what I find truly disturbing is that their party leaders don't even deny it, and still so many people vote for them. That speaks volumes of the moral code of the majority of people in this country.

Shoprat, when you are a leftard, forgiveness is not needed because you can do no wrong.

Reverend, immoral and unethical, that is a mild way of putting it. I see them as scum-sucking, disgusting, degenerate slimeballs. And no, they don't deny it, I think they are PROUD of it. I also agree that the masses in America have suffered massive moral decay over the years. Our founding fathers are rolling over in their graves for sure.

Daily Rant, you too. I just got back from your blog. You have a real good start there.