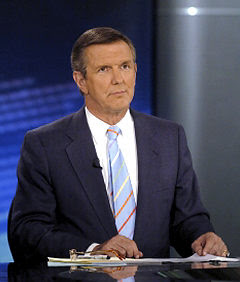 Good riddance, don't let the door hit you in the ass on your way out!
Posted by Average American at 12:29 AM

I take it you're not a fan Joe. I've heard of this fellow, but don't know much about him, however if you don't like him, then neither do i.

Nice but unfortuantely they'll just get another far-left idiot to take his place, oops they already did...

BB...were his ratings the top in the country despite losing advertisers to leftwing agenda? :)

Honestly the only newsguy I like these days is Jim Lehrer.

I second that AA

Don't let the door hit him on the way out..
Or maybe it should!

MK, he's that smug jerk that interviewed Sarah Palin with such a vengence. That's only about 1/3 of the reason I dislike him. He just reeks of liberal bias whenever he opens his mouth.

Chuck, I find Diane Sawyer to be a little easier to take, and besides, she is cuter.

BB, not that I know of, but then, neither did Glenn Beck.

Z, I don't know who gets the blame for lackluster ratings, the person or the network. A little of each I guess. The big three have lost their grip over the last 10 or 20 years. Not the kings they used to be.

Z-Man, I don't get much of my news from the tube anymore, it's way way too biased.

Right is Right, yeah, maybe. The article I saw hinted that he may not be 100% done at ABC. Time will tell.

Brooke, I know for I sure will NOT miss him!

I say good riddance! I lost all respect for him the day he had that farce of an interview with Palin. I think he lost a lot of respect from everyone after that!

Jenn, and I think you are right! I certainly was turned off by that slime ball when he did that. Pompous assholes like that do not keep me as an audience.

Angel, yuppers! Diane Sawyer is not perfect, but I think she will be a little more unbiased than Charlie was.

Commoncents, thank you Sure thing, I'll link you up and go visit you.

Lone Voice, I wish another dozen leftist media types would retire with him.

Bill Moyers is another one who needs to go but he has too much of a bug up his ass about conservatives in general and talk radio in particular to go find other pursuits but at least in his case he's pretty upfront about his politics and he's more a roving commentator anyway. Brian Williams, I think he'd have sex with Obama if he could.