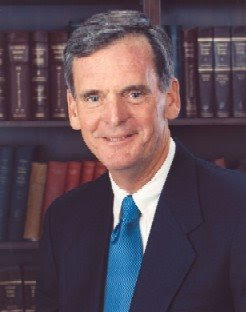 Many of you may have heard by now that Republican Senator Judd Gregg from New Hampshire is the likely NObama pick for Secretary of Commerce. I am from N.H. and know the Senator slightly and know OF him quite well. He would be a GREAT pick for this position, however, our Governor is a Democrat, moderate, but still a Democrat. What a dilemma. As you might imagine, the left is already salivating at the prospects of 60 Senators. They might just be having an illusion however as the Governor and the Senator are rather friendly. I think if The Senator can get the Governor to agree to a Republican replacement (a good possibility), he can be trusted to keep his word. There are rumors that the Governor is considering a run for the Senate himself in 2010, and so it would make sense for him to appoint a Republican, especially one that he felt he could beat later on (read as a conservative!). Governor Lynch is a savvy politician and I think this will be the likely scenario.

Here is a link you should follow to get the story.

"Leading the pack to replace the fiscal conservative was his former chief of staff and a veteran of the Reagan White House, Bonnie Newman. Officials expect New Hampshire Gov. John Lynch, a Democrat, would name her to fill the final two years of Gregg's term and then would not seek the seat for a full term in 2010."

Former Republican state House Speaker Doug Scamman, a Governor Lynch friend and ally is considered a good bet also. I personally would like to see him consider Warren Rudman, a former N.H. Senator and a true conservative.

I took the time tonight to rattle off an e-mail to the Senator expressing my concerns. If anyone from N.H. reads this, consider doing the same thing please. Here is my e-mail message:

It may be premature, but let me congratulate you for being considered for the position of Secretary of Commerce. It is a position that I know you would excel in. Your fiscal conservatism is just what the country needs right now. With that said however, I have to ask you please do not accept the position unless you have a guarantee from Governor Lynch that you will be replaced by a Republican.

Power in Washington is so lop-sided right now that we just cannot allow it to get worse. If you were to be replaced with a Democrat and if Franken ends up seated, I don't have to tell you how fast every liberal program the left is trying to get would be railroaded through.

Thank you so much for the consideration I know you will, and probably already are, giving this request.

I am planning to e-mail the Governor also. We in N.H. are mostly moderate people. The parties have their differences, but, for the most part we do actually get along. I even voted for this Democrat Governor. The Republican just didn't cut it for me.
Posted by Average American at 7:56 PM

I am absolutely livid at the prospect of Al Franken in any kind of public office, let alone a U.S. Senate seat.

They might just be having an illusion however as the Governor and the Senator are rather friendly. I think if The Senator can get the Governor to agree to a Republican replacement (a good possibility), he can be trusted to keep his word.

Friendship aside, how likely could that be that your governor would choose a Republican replacement? Even one he thinks he could beat (I'd hate to stake any bets on a rumor)? Some politicians don't mix friendship with political decision-making. Is your governor the kind of man who sticks to party? Or is he his own man?

I really think that he is a man of his word. There is a good chance that we can get a cabinet post AND retain the Senate seat. If he tells Senator Gregg that this is what he will do, then he will do it.

I even voted for this Democrat Governor. The Republican just didn't cut it for me.

I know what you mean. In years past (not recently, though), I've voted for the Dem candidate here in Virginia. I'm registered as an Independent for that very reason.

I hope it turns it down. I don't trust too many Democrats.

I hope it turns it down. I don't trust too many Democrats.

Hm. I don't know that I trust ANYONE Obama picks for anything.

I agree with Shoprat, I wouldn't trust any politican (especially a Democrat.)

AA, I don't trust any of them. I saw the stripes on this senator months ago. Between him and mine we don't need anyone to run for a democratic seat. I listened to talk radio and they likened this situation of the Illinois situation.....Nice Huh!!! We will see.....

AA, I don't trust any of them. I saw the stripes on this senator months ago. Between him and mine we don't need anyone to run for a democratic seat. I listened to talk radio and they likened this situation of the Illinois situation.....Nice Huh!!! We will see.....

Hopefully, we'll all get more conservatives with spines in the Obama administration, and someone to counter the stolen seat given to Franken.

By the way, linking your blog to mine.

AOW, I consider liberal versus conservative to be MUCH more important than a D or an R being in front of a name.

Shoprat, I don't trust too many of them either, but I feel confident in this one.

Brooke, Senator Gregg is the best pick the messiah has made to date. His being chosen actually gives me a glimmer of hope.

Beth, in most cases I would agree, but not this one.

Tapline, I don't see ANY similarity between this and Illinois. Trying to save the seat for the party is no where near the same as selling it.

Tom, it appears that this seat will be safe until 2010. After that, we may well kiss it goodbye depending on what transpires in the next 2 years. I still have my fingers crosses for coleman.

Angel, Governor Lynch actually is a man with some honor, sadly lacking in many many dems. I think things will work out well.

The word right now is that Obama will announce Gregg as the nominee tomorrow. Supposedly Lynch will noame a Republican to replace him. I do think that Lynch is going to run in 2010 and he probably agreed to fill Gregg's seat with Bonnie Newman because she will not run in 2010 leaving the seat open for Lynch.
Most likely if he chose to run he would win even if Gregg was still seated, but this does make it easier.

MrPinkEyes, I see it exactly the same way, and I really have no problem with it. Commerce is getting a good man. I have conflicting feelings about helping NObama look good, but this is what is best for the country so that makes it palatible.

I hope you are right, because if your governor changes his mind, I shudder to think of a 60 seat Democratic Senate.

It's a tactic. Easy majority win.

Beth-BZ, you have to realize that New Hampshire is still a conservative state. It may be blue these days, but the libs are still very much in the minority. My Dad, God bless his soul, was a Democrat ALL HIS LIFE, but he was also the MOST conservative man I ever knew. He and Mom are where I got MY values. John Lynch is an honorable man. He will deliver what he promised.