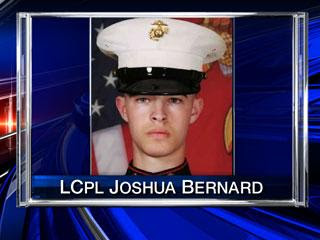 NEW PORTLAND (NEWS CENTER) -- John Bernard says no one needs to see the photo of his son mortally wounded in Afghanistan.

His 21 year old son Joshua, was killed in Afghanistan last month. An Associated Press photographer took a picture of Bernard wounded on the battlefield before he died.

John Bernard also believes the Rules of Engagement in war put the safety of citizens in other countries ahead of the safety of US Soldiers.

The sad story above was at WCSH TV channel 6. I very strongly advise you to follow this link to view the accompanying video. Listen to John, Joshua's dad tell the story.

When you get done there, I invite you all to e-mail AP and let them know how you feel about the cold-hearted way they did their "job" on this story. Here is the link you can use to "contact AP."
I looked around their site a little and found this statement of values and principles. You can follow this link to find out if they are actually living up to their OWN values, nevermind OUR values!

I've already e-mailed the heartless jerks and anyone not comfortable writing their own is more than welcome to use mine. The more people that express their anger and horror over this garbage journalism, the less likely we will see it again. Here's what I had to say to them:

"I was saddened by your complete disregard for the feelings of the family of Marine Lance Corporal Joshua Bernard. To publish his picture against the wishes of his family was a sick and perverted thing to do. He and millions of other American heros over the life of our country have paid the ultimate price to protect our freedoms, including your freedom of speech. You dishonor all of them by actions such as this. Having the freedom/right to do something does NOT make it the right thing to do. The following paragraph is from your own site. It supposedly is how you conduct your business. I would NOT call this incident "ethical behavior." Try living up to it next time!"

"In the 21st century, that news is transmitted in more ways than ever before – in print, on the air and on the Web, with words, images, graphics, sounds and video. But....always....and in all media, we insist on the....highest standards of integrity and ethical behavior....when we gather and deliver the news."

Posted by Average American at 10:32 AM

This is infuriating beyond all words!!!

Someday the MSM is going to wake up and find they don't have jobs...because no one's really listening to their shite anymore, nor should they listen.

Brooke, "infuriating" is a polite way of putting it. I tend to lean towards f***ing disgusting!

Dr. Dave, welcome and thanks for the visit. Just because the AP is against war does not make that type of journalism acceptable. I hope that young Marines Dad sues the shit out of that rag. At the very least I hope they get millions of e-mails, letters, and phone calls telling them where to go!

I'm with Dr Dave. The liberal media is dying in this country. I don't think there is a single liberal media outlet adding viewers/listeners/readers right now.

Obama lifted the ban on showing the coffins come home from overseas, this must be the next step. I find it disgusting and horrible that AP would do this simply to get the story. They have gone way over the line!

As I said at my blog to you AA nice letter back to those leftist f***s at AP and those things make all the difference...

Even they hate piles of emails and this despicable act deserves it and far more.

Fox News was interviewed this morning on "Fox and Friends." He's a retired Marine and knows what's what with the AP's motives.

Maybe they should instead film people being executed in socialist nations for not agreeing with their leaders. Naw they can't do that.

Chuck, they deserve to die. They haven't been worth a shit for years now.

MPE, that was easy for him to do. He knew it would never be his loved one in one of those coffins. Probably true for AP too.

Ray, you must have noticed I bit my tongue while writing that e-mail. None of the usual cussing, BUT strongly worded!

AOW, I feel so sorry for the family. What a mean-spirited thing to have to live through, especially just after losing a son. Something that Marine is not done with this bullshit yet! I hope AP will be regretting the day they did that.

Shoprat, if I was POTUS, you can bet those heartless bastards would NEVER get embedded again, but alas, I am not POTUS and we all know that the TEMPORARY usurper of that office does not think like I do.

Good comment AA. When I first heard this I was appalled and disgusted to say the least. The lack of integrity goes against everything America represents.

Keep up the good fight my friend! Will be contacting them once I leave here!!!!!

Thanks Jenn, I hope they are FLOODED with negative mail for this wicked stunt.

Done, hope the bastards get flooded with emails just like yours Joe.

Well, Average, you saw how I feel about this.
THERE IS no reason to publish this photo........
The incivility and lack of dignity on the Left is killing our country and we've got to speak up! GOOD JOB

MK, I hope so too. The more backlash they get the more likely it might make a difference in the future.

Z, I just wish there was a way that I could get a MILLION people to blast them for what they did! I feel they owe that family a SINCERE apology, a PROMISE never to do anything like that again, AND something financial, like maybe setting up and funding a memorial scholarship.

how horrific is the media!...Tryin to play catch up here..busy busy!:)

My e-mail to the AP is too graphic to repeat here.

Angel, I know what you mean. I read way to many blogs, but I can't not visit all my friends can I? We need more hours in the day. Maybe the messiah could help.

Jenn, I love that girl!! Make them take notice and don't leave ANY doubt in their minds what you think of them! THANKS for doing it.