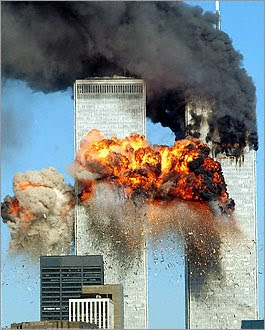 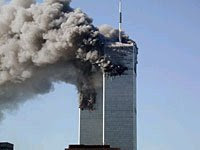 I first published this post 3 years ago on the seventh anniversary of that horrendous day and every word is still just as true today as it was then, so I decided to re-post it. Hey, call me lazy, but I can't come up with any better words than I did back then.

As we remember September 11, 2001, we should take the time to reflect on just what happened that day. Four United States aircraft crashed. Two buildings were completely destroyed and several others were damaged in New York. One building was extensively damaged in Washington. A field in Pennslyvania claimed the forth plane. Over three thousand innocent civilians died. Countless heros emerged. Americans everywhere cried.

It's seven (ten) years later and most people seem to have completely forgotten that horrific day. Pearl Harbor brings back more vivid memories, and that was over 60 years ago! What in Hell happened America? Where did all the anger, disgust, and outrage go? I'm still MAD AS HELL! Don't forget. Don't let go of your anger. Remember the feelings you had that day and don't let go of them!

What REALLY happened that day? Radical Islamic terrorists attacked us ON OUR OWN SOIL! This was not their first attack on us by any means, and it won't be the last. We have managed to contain the fighting away from our own soil, for now. We must let our military and our secret services do their jobs. If being rougher than some people like on prisoners gets information that saves just one American life, then I say "go for it!" If racial profiling nabs just one terrorist before he blows up another plane or bus or whatever, then I say "go for it!" If wire tapping our telephone calls catches just one terrorist plot to kill Americans, then I say "GO FOR IT!"

Americans, in fact, the world had better get used to "the war on terror." Anyone who thinks that when we're done in Iraq and Afghanistan, that the world will be free of terror---THINK AGAIN! They are just the beginning. I hope that my children or at least my grandchildren will see the end of terrorist reigns, but I know that I will not. How long have we been fighting cancer? That's what terrorism is, just one more form of cancer.

May the innocent victims that were brutally killed that day be resting in Heaven while the people that carried out, planned, or in any way had a part in these murderous, despicable acts, be still and forever more BURNING in Hell! May the passing of 10 years have eased the grief of those left behind. May God bless them and watch over them, and may He bless the U.S.A.
Posted by Average American at 12:18 AM

where's YOU been, AA? Good to have you comment at geeeZ, thanks.
I wasn't sure if you were being sarcastic or not, but thanks for the comment!

Excellent piece..I think I remember it and your last paragraph is RIGHT ON.

Hi Z! Yes, my comment was sarcastic. I took a needed hiatus from blogging and hadn't really planned on coming back to it, but I just can't ignore all the crap from D.C. anymore. My blogging will be limited this time, I can not let it consume me again, but I'll try to make the posts even more impactful. I even linked the last one to my facebook page. I may try to tie the two together. Unlike before, I don't care if people I know in real life see my virtual world, and may even promote same.

And I'm glad you're blogging again...I don't do Facebook but am glad to have you back here ...xx

I am also glad to see you back, AA!

Thank you ladies! It's good to be back. I won't be nearly as active as in the old days, but I will try to make the posts I do write better than ever. It's amazing how many blogs I had to delete from my list. I guess I wasn't the only one that "flew the coop."