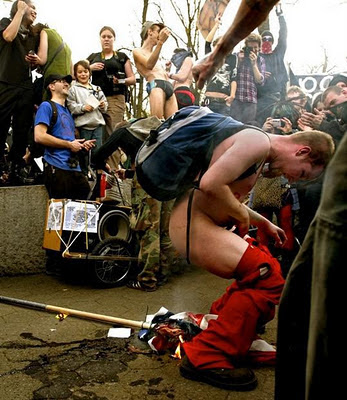 I wonder who the proud parents of this jerk are. If one of my kids ever even thought of doing this, I would disown him! Just in case you couldn't guess, this picture was taken at the occupy Oakland illegal encampment.

Where in Hell are the cops to put a stop to this? He may have a right to disrespect the American flag, but it IS STILL ILLEGAL to bare all in a public place. Where are the charges for indecent exposure?? Why is the National Park Service allowing these morons to stay more than 2 weeks? That's the limit for their campgrounds, and this isn't even a campground. How about Eric Holder or somebody doing their job for a change?!

It's about time for this occupy bullshit to stop! January 20th can't come soon enough! I just can not believe that the temporary occupant of 1600 Pennsylvania Avenue actually sides with this group of imbeciles, and has such loathing for the Tea Party! He needs to go back to Kenya---and take his "friends" with him. It is common practice to drop trow and take a dump where ever you want to in third world countries like that, at least it was in Viet Nam.
Posted by Average American at 11:59 PM

sadly, considering the source, I am not surprised.

The anarchists in this country want to erase all laws so they can write and enforce their own (which will allow them to bully us to their hearts' content) and they are in league with the left.

They get away with it because they are violent liberal scum.

I feel sorry for the cops and the people who are unfortunate enough to cross paths with these scumbags.

The best way to deal with them is to get the fire hose and wash them out.

However, much of western society has grown weak and cowardly, as soon as anyone dares to clean out the trash, the wailing and whining from the usual suspects will start and the authorities who did the right thing will be hung out to dry.