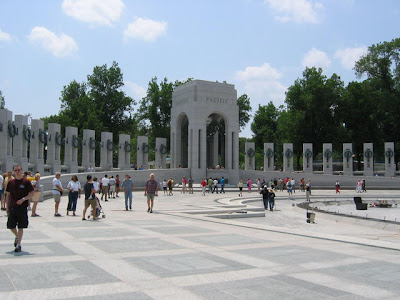 I received an E-mail a week or two ago that I thought I should share with all of my blogging friends. It is just one more example of how we are losing an important battle. We just can't afford to let the next generation grow up without God as part of everyday life. I just can't see how keeping Him out of ANY public settings deprives Atheists. All they have to do is---don't look! Our country was born with Christian underpinnings, and it should stay that way. "One nation, under God" should stay in our pledge, "In God we trust" should stay on our currency, and these four words should be engraved and STAY where President Roosevelt had them!

SHALL WE HIRE A MONUMENT ENGRAVER TO GO TO ARLINGTON NATIONAL CEMETERY AND ADD THE MISSING
WORDS ?

A MESSAGE FROM AN APPALLED
OBSERVER:

Today I went to visit the new World War II Memorial in Washington, DC. I got an unexpected history lesson. Because I'm a baby boomer, I was one of the youngest in the crowd. Most were the age of my parents, Veterans of 'the greatest war,' with their families. It was a beautiful day, and people were smiling and happy to be there. Hundreds of us milled around the memorial, reading the inspiring words of Eisenhower and Truman that are engraved there.

On the Pacific side of the memorial, a group of us gathered to read the words President Roosevelt used to announce the attack on Pearl Harbor:

Yesterday, December 7, 1941-- a date which will live in infamy--the United States of America was suddenly and deliberately attacked.

'With confidence in our armed forces, with the abounding determination of our people, we will gain the inevitable triumph.'

But as she read, she was suddenly turned angry. 'Wait a minute,' she said, 'they left out the end of the quote.. They left out the most important part. Roosevelt ended the message with 'so help us God.'

Her husband said, 'You are probably right. We're not supposed to say things like that now.'

'I know I'm right,' she insisted. 'I remember the speech.' The two looked dismayed, shook their heads sadly and walked away.

Listening to their conversation, I thought to myself, Well, it has been over 50 years she's probably forgotten.'

But she had not forgotten. She was right.

I went home and pulled out the book my book club is reading --- 'Flags of Our Fathers' by James Bradley. It's all about the battle at Iwo Jima .
I haven't gotten too far in the book. It's tough to read because it's a graphic description of the WWII battles in the Pacific.

But right there it was on page 58. Roosevelt's speech to the nation ends in 'so help us God.'

The people who edited out that part of the speech when they engraved it on the memorial could have fooled me. I was born after the war.! But they couldn't fool the people who were there. Roosevelt's words are engraved on their hearts.

Send this around to your friends. People need to know before everyone forgets. People today are trying to change the history of America by leaving God out of it, but the truth is, God has been a part of this nation, since the beginning. He still wants to be...and He always will be!

If you agree, pass this on and God Bless YOU!

If not, May God Forgive You!

A short trip through Google Land, and I found the entire speech, which I share with you now, so that you may see for yourselves that this E-mail was accurate! Follow this link to this speech at American Rhetoric.com. It is also a good source if you need to find other speeches.

Mr. Vice President, Mr. Speaker, Members of the Senate, and of the House of Representatives:

Yesterday, December 7th, 1941 -- a date which will live in infamy -- the United States of America was suddenly and deliberately attacked by naval and air forces of the Empire of Japan.

The United States was at peace with that nation and, at the solicitation of Japan, was still in conversation with its government and its emperor looking toward the maintenance of peace in the Pacific.

Indeed, one hour after Japanese air squadrons had commenced bombing in the American island of Oahu, the Japanese ambassador to the United States and his colleague delivered to our Secretary of State a formal reply to a recent American message. And while this reply stated that it seemed useless to continue the existing diplomatic negotiations, it contained no threat or hint of war or of armed attack.

It will be recorded that the distance of Hawaii from Japan makes it obvious that the attack was deliberately planned many days or even weeks ago. During the intervening time, the Japanese government has deliberately sought to deceive the United States by false statements and expressions of hope for continued peace.

The attack yesterday on the Hawaiian islands has caused severe damage to American naval and military forces. I regret to tell you that very many American lives have been lost. In addition, American ships have been reported torpedoed on the high seas between San Francisco and Honolulu.

Yesterday, the Japanese government also launched an attack against Malaya.

And this morning, the Japanese attacked Midway Island.

Japan has, therefore, undertaken a surprise offensive extending throughout the Pacific area. The facts of yesterday and today speak for themselves. The people of the United States have already formed their opinions and well understand the implications to the very life and safety of our nation.

As commander in chief of the Army and Navy, I have directed that all measures be taken for our defense. But always will our whole nation remember the character of the onslaught against us.

No matter how long it may take us to overcome this premeditated invasion, the American people in their righteous might will win through to absolute victory.

I believe that I interpret the will of the Congress and of the people when I assert that we will not only defend ourselves to the uttermost, but will make it very certain that this form of treachery shall never again endanger us.

Hostilities exist. There is no blinking at the fact that our people, our territory, and our interests are in grave danger.

With confidence in our armed forces, with the unbounding determination of our people, we will gain the inevitable triumph -- so help us God.

I ask that the Congress declare that since the unprovoked and dastardly attack by Japan on Sunday, December 7th, 1941, a state of war has existed between the United States and the Japanese empire.

Posted by Average American at 8:15 PM

AA, Great post. It doesn't surprise me in the least, to hav something as meaningful as the last part of Roosevelts quote to be omitted by the political right..... WAKE UP America....What happened to God and Country...God is still part of this country's past both private and public,as is seen by our history. Let it remain so until fairly recently when you began to remove his name from the public arena, much later than WWII....I ramble,,,stay well....

It gets worse Joe. This generation is going to be worshipping Obama instead. I'm in college...and I can't tell you how many people I have seen wearing t-shirts with portraits of the Big O on them.

AA,
Good post. I won't let people rewrite history in my classroom. We listen to a lot of speeches and I don't edit them. The students like to listen to the presidents and I wouldn't think of allowing them to listen to something that has been edited. We listen to this speech in whole and accurately quoted. This appallig. Shame on the memorial people to allow the speech to be edited. My sign is still up so far.

Should be "This is appalling." Sorry

fabulous post!..Happy Thanksgiving and keep fightin the good fight my friend !! :-)..and God bless ya!

If they can take away God from the people, then they can transplant whatever wretched, failed ideology in its place. No matter that it has failed everywhere its been tried, those that push for it don't care.

First they'll come for your bible, then your gun, then your soul. Good post Joe. Fight them everywhere you can, because like you say, it's not affecting atheists. The way some of these scumbags are carrying on is like atheists are being whipped into church or something.

Tapline, it doesn't surprise me either, but it does piss me off. We should have fought this trend much earlier than we did.

C.H., I know just what you mean. It sure is a sickening sight, isn't it!

L&OTeacher, I am SO GLAD that there are still a few good teachers like yourself left. To bad there aren't a whole lot more like you!

Angel, thank you and you keep up your great work also!

MK, maybe the atheists could start on the Islamists and leave Christianity alone for a while. We could even join their side for that fight! You would think that foot washing stations would piss them off more than a manger scene once a year!? Hey, with the Islamists, they may get "whipped" into a mosque eventually. We would never do that to them.

that was one of those legends, AA.
http://www.snopes.com/politics/military/memorial.asp

We need to demand it be corrected. But how?

I'm so angry I can't string together a coherent comment.

This is hard to believe. I guess the way things are going in our contry, we may end up in jail for even saying God in public. I am just thankful that my Daddy isn't still around to see what is going on. He served in WWII, Korea, Vietnam and he wouldn't like this at all. We had better wake up and do something before it's to late.

I'm surprised there hasn't been a petition or drive to insist those words be installed back ONTO the memorial.

This is why I hate email forwards. Always, ALWAYS, ALWAYS, verify that you aren't being had....otherwise you simply perpetuate myth-making.

I think there's a lot to be outraged by when it comes to the eradication of our Judeo-Christian heritage and traditions; but we should avoid getting egg on our faces, in "fighting the good fight".

I say this as a non-religious American who loves religious expression, Christian traditions, Christmas, etc.

Griper, Oops, it seems you're right. I think the other sentence would have been a better choice though.

Sorry everyone. I should have snooped over to snopes first. The fact does still remain however that a lot of this IS going on and we should try to halt it now. You know the Muslims won't take the abuse that the Christians do in these matters, so why should we?

YES, ADD THE MISSING 'IN GOD WE TRUST' - WE ARE SICK AND TIRED OF THIS MARXIST BUNCH IN OFFICE AND IN OUR EDUCATIONAL AND LEGAL SYSTEMS! OUT WITH THEM ALL! TIME TO TAKE BACK AMERICA. LET THE LIBS MOVE TO EUROPE,CHINA OR RUSSIA!