Many of the so-called "swing states" have large numbers of rural gun toting voters who may or may not know NOBAMA's record on gun control. I think it is vitally important that we get them the information they need to make the right choice. Please follow this link to the NRA's site. Check out the information there and get familiar with it so you can speak to people in an informed way. You will be able to change many minds on this one issue. Be sure to send out the information or the link to your address book also. 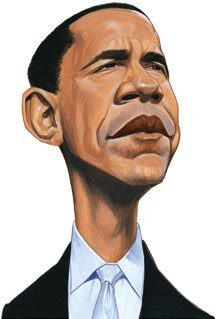 FACT: Barack Obama voted to uphold local gun bans and the criminal prosecution of people who use firearms in self-defense.5

FACT: Barack Obama refused to sign a friend-of-the-court Brief in support of individual Second Amendment rights in the Heller case.

FACT: Barack Obama was a member of the Board of Directors of the Joyce Foundation, the leading source of funds for anti-gun organizations and “research.”8

FACT: Barack Obama supported a proposal to ban gun stores within 5 miles of a school or park, which would eliminate almost every gun store in America.9

FACT: Barack Obama voted not to notify gun owners when the state of Illinois did records searches on them.10

FACT: Barack Obama voted against a measure to lower the Firearms Owners Identification card age minimum from 21 to 18, a measure designed to assist young people in the military.11

FACT: Barack Obama supports repeal of the Tiahrt Amendment, which prohibits information on gun traces collected by the BATFE from being used in reckless lawsuits against firearm dealers and manufacturers.14

FACT: Barack Obama supports a ban on the resale of police issued firearms, even if the money is going to police departments for replacement equipment.9

FACT: Barack Obama supports mandatory firearm training requirements for all gun owners and a ban on gun ownership for persons under the age of 21.9

Please visit the NRA site to see all the notes referred to by numbers and also to find many links to other sources of information. Many people don't really understand what we mean when we say NOBAMA is a socialist, but they "get it" and they get mad when I tell them that NOBAMA is against guns!
Posted by Average American at 1:20 PM

Yet another reason NOT to vote Obama.

People need to honestly ask themselves WHY a politician would not want them to posses a firearm.

The answer is illuminating, IMO.

You have this one right my friend Average American ...and thank you for the very kind complment.
And by the looks of the stock market today, maybe the market already antisapates a Obama victory and it's down about 400 already today.

There are so many good reasons not to vote for him. I don't understand why anyone with a functioning brain-cell and a bit of integrity is.

People are voting blindly.In a way it is an election based on skin color.

Nicely done. I hate when Dems suddenly become born again gun owners when it's election time. I'll never forget the sham that Kerry perpetrated in Ohio pretending to hunt for geese. Sheese, how sleazy can you get.

I do believe this nation, if it goes that way, is SO going to have a case of Buyers' Remorse with Mr. Obama. . .

Brooke, like we need any more reasons not to vote for him. I just wish more people felt as we do.

Mary, you're welcome. I hate to even think how much I lost today, again!

Shoprat, I can't figure it out either. By rights, only the most liberal of people should be voting for him, maybe 20%. The rest are buffaloed by his charm and bullshit!

L&OTeacher, that's what's nice about voting records, they are---RECORDS. A little digging and most any lie can be exposed. NOBAMA has NEVER been a friend of gun owners. PERIOD!

BZ, I sure do hope we don't have to find out the hard way, because believe me IT WILL BE THE HARD WAY!

hey buddy..why would he want an armed citizenry eh?..great stuff as always!:)

Thanks Angel. Why indeed. I heard him say, just today, while talking about the Supreme Court rule overturning DC's gun ban, that he thought the 2nd amendment covered individuals rights as well as militia's rights. That was just pandering, and he followed it with "subject to common sense regulation." What a mealy-mouth asshole!

Explanation for above comment: I just heard that, he said it quite a while ago.

They can have my guns when they pull them out of my cold dead hands.

It’s up to McCain to let the voters in these swing states know about the real Obama, but he doesn’t seem to be doing it. With only 12 days to go McCain needs to sharpen his rhetoric, or we will all suffer under an Obama administration.

McCainpalin, you're right, it is his job to fight for the win, but I feel we all have a stake in this and so should all help. I talk it up to EVERYONE who will listen. I know for sure I have changed at least 20 minds, and I want to change 20 more and then 20 more. We all must do our part, or we will all be sorry!

If Obama is elected folks, make no mistake, the mad left will do its best to take away as many of your freedoms, that too many of you take for granted, away from you.

They will come after your guns folks, make no mistake and you'd better be prepared. The first step to creating a compliant population and getting people to accept more and more government interference and nannying is to disarm you.

I always say, if you Americans give up your guns, we're all screwed.

So even though I'm not an American, i'm joining the NRA if Obama wins.

Hell MK, the NRA is probably one of their first targets to irradicate. They won't get my guns!

It's only about BUSH...they don't like BUSH, centrists, all the left, and some Republicans, and they're voting for CHANGE!

I keep asking the dopes I know like that to THINK, but that seems an impossible suggestion.

How does one go from I HATE BUSH to I WILL BYPASS THE REPUBLICAN CANDIDATE WHO HAS STOOD UP TO BUSH SO OFTEN DURING THE LAST 8 YEARS AND VOTE FOR A MAN WHO LIES AND IS A SOCIALIST WITH REAL SCARY FRIENDS AND AN OPINION OF HIMSELF ILLUSTRATED BEST BY LARGE GREEK COLUMNS??

I don't get it...this gun control thing is just another reason any thinking man should stop and ask himself "WHAT? What's he scared of?"

Z, I just ran into one of those NOBAMABOTS tonight myself. A guy about 50 doesn't want "4 more years of Bush". Also, the economy sucks--all because of Bush and the Republicans. I argued until I was blue in the face and then gave up, you can't win them all. I just told him that if NOBAMA wins, come back and buy me a White Russian in 4 years, if he has any money left!

The Unseen One said...

I heard Obama once say that he believed in the second amendment, yet also believed that states and municipalities had the right to curtail it in whatever way they saw fit.

I wonder if he feels the same way about the first amendment...

To my dismay, the issue of gun control never came up in the debates or in any other discussion I've heard in the mainstream media.

Every supporter of the Second Amendment needs to pay attention to the facts about Obama's position on gun control.

Unseen one, I watched his lips move as he said that he thought the 2nd amendment covered individuals rights as well as militia's rights, but that was just pandering, and he followed it with "subject to common sense regulation." What a mealy-mouth asshole! As far as the first amendment goes, I am sure his views on it are different than mine. Just look at all the things about him that we conservatives cannot bring up!

Always on watch, you are right, it never came up in debates, and I'm not sure it has been covered in any political ads either. I guess it's us that will have to spread the word. I have used it several times with great success among friends that I know hunt. It's just one more "silver bullet" to help convert NOBAMA supporters over.

Barack Obama is not being honest about his feelings on gun control.

You see, there's an election he's trying to win...

Wordsmith, he's not being honest about anything as far as I can tell, except that he wants to "share"(redistribute) our wealth. You see, when he tells the truth, he loses votes. That's a good enough reason to lie, isn't it?

I bet he's not a fan of Denny Crane.