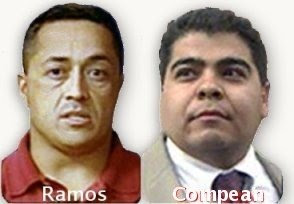 Bush's decision to commute the sentences of Ignacio Ramos and Jose Compean, who tried to cover up the shooting, was welcomed by both Republican and Democratic members of Congress. They had long argued that the agents were merely doing their jobs, defending the American border against criminals. They also maintained that the more than 10-year prison sentences the pair was given were too harsh.

Finally! It's about time. Bush should have given them a full pardon, but commuting their sentences will have to do. These men did what they were hired to do, how dare our government put them in jail, even for just one day? Please follow this link for the rest of the story.
Posted by Average American at 2:10 PM

Jailed for doing their jobs? He should have pardoned and vindicated them. At least it's something.

what a horror this whole thing was..but I'm thrilled for them! (hugs)

The joker that prosecuted these two belongs in jail.

It should have been a pardon... But at least Bush showed SOME decency after going on about his "good friend" Sutton.

I'm just glad these men will be with their families again.

I am only sorry that these officers had to spend anytime in jail with scumbags. Being convicted on the word of this drug-smuggling, piece of garbage is a greave miscarriage of justice. t101, I agree with you. I saw an interview with this Mike Nifong wannabe. I wonder what office he is running for next?

Five comments in agreement with each other. Truth, there is hope for you yet. This should not be an issue of conservative versus liberal. It is a matter of right and wrong, and we all agree. Why can't our politicians see what most Americans see, and that is that they HAVE to do something about illegal immigration. These men were doing their jobs. When they were imprisoned, it sent a real bad message to all of our gallant immigration personel, it told them to back off and don't enforce our laws. Absolutely the opposite message from what should have been sent. I would much rather have seen a pardon, but this was a step in the right direction.

AA, Great post.. I guess we are all in the choir. The prosecutor was really something wasn't he. He really must have been proud of himself. I understand being an agent itn't the greatest of jobs. Our government is involved very deeply with Mexico and the goings on cross borders. We just gave medical to all the children, and some adults, etc in the bill just approved by the house. That's everyone including illegals..The one they tried to pass before which Bush refused to sign...Now...no problem man just bring them to me.....

Tapline, neither of our political parties has any desire to stop illegal immigration. If they did, it would be stopped by now. The Republicans get cheap labor for their cronies, the Democrats get fodder for the ACORN voting machine and possibly 20 million votes when they legalize them, and the Average American gets a royal screwing. Look for amnesty and citizenship within 4 years. This will be the cruelist part of NOBama's legacy.

I'm hoping my precious Unions see the light about how illegal immigration affects working Americans and lobby Obama to do what it takes to fight it. I'm all for legasl immigration. We all are. It's illegals working for slave wages in fields and meat processing plants that keep wages down. A group of illegals roofing for an unscroupulous contractor cuts my people's naughty parts off. I find no comprimise of my Democratic and liberl roots by supporting American and legally documented workers.

Can you imagine the consternation for their families, having to wait for the veritable "last second"? Unfair, I say.

Truth 101, no one's said it yet, but I'll write it: you are ABSOLUTELY correct with that statement.

The immigration system is fundamentally BROKEN and needs to be repaired NOW.

I am glad this happened. These guys need to hook up with Joe Horn.

Truth, I'm a union construction worker too, and I 100% agree with you on this one. Damn, man, we are agreeing on way to much stuff lately. I thought you were supposed to be a liberal?

BZ, those men spent the last 5 years or so in jail needlessly. You can't put a price tag on what the government owes them for that. I can't even imagine why it took Bush so long.

Texas Truth, you got me stumped. Now I have to go find out who Joe Horn is. I'm sure I should know, but the name doesn't ring a bell.

Joe Horn, the guy in Texas who shot two burglers next door while he was on the phone with 911. Now I remember. Last I heard he got away with it. Good for him!

Turned out they were illegal aliens. Double good for him!!

We were all pulling for a pardon. I think the reason it didn't happen was the cover-up of the so-called "crime".

hey buddy..just checkin on ya the day after the coronation of the new messiah...ughhhhhhhhhhhhhhh!

Wordsmith, I think you're right. It wasn't the smartest thing they could have done. Still, I have no problem with the shooting itself.

Angel, well, I have survived the first day, albeit with a hangover. Time will tell. He put in a White House pay freeze and some stiffer guidelines for lobbyists, I guess that's a good start, miniscule really, but a good start.

Wordsmith, I think you're right. It wasn't the smartest thing they could have done. Still, I have no problem with the shooting itself.

Fortunately, since it wasn't a pardon, these two thugs are still convicted felons and won't be packing heat again any time soon.

Good afternoon Ducky. How's things down in sunny liberal Taxachusetts? Had that been regular cops in any of our nations big cities, there would have been an incident investigation and most likely the result would have been "justifiable use of force". The guy was a known drug dealer and an illegal alien. That is strike 2. Trying to run from the law was strike 3---he's OUT.

Too bad President Bush waited until the eleventh hour to pardon them, but thank God it's done.

Ducky, the only thug involved in this disussion was the drug dealer.

Justice was served when they shot him.

Did they cut corners? Probably. Therefore, I'm not outraged at a short jail term for them. But as long as it is very short.

"these two thugs are still convicted felons and won't be packing heat again any time soon."

I hope there is a place for them in some clandestine service.

Dmarks, you are correct, we need more QUALITY agents willing to do what is necessary to actually FIGHT drugs. If that includes occasionally using force, then so be it.