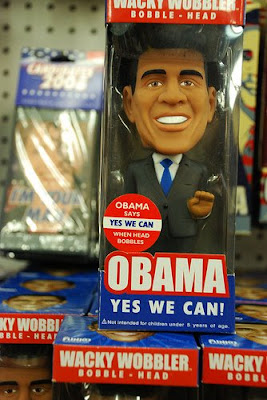 It seems that NObama coins and plates was just the start. There are literally hundreds of items flying off the store shelves in Washington, D.C. and elsewhere. Retailers are absolutely giddy about all the new-found sales. Follow this link for whole story.

You really should follow the link and read the whole article, you will surely laugh your butts off! I decided to post the next few paragraphs because I have to make sure you don't miss the periscopes!

Obama’s Presidential Inaugural Committee operates a Web site and a retail store offering dozens of official commemorative items, from $2 “I Was There” buttons to a $3,000 set of gold, silver and bronze inaugural medallions. A canvas tote bag designed by Diane Von Furstenberg sells for $70 and a Donna Karan “100 percent organic cotton” t-shirt is $45. .

The Washington Metropolitan Area Transit Authority is selling reusable smart cards with Obama’s likeness for $10, plus the cost of subway or bus fares.

Political Americana expects to sell 500,000 buttons in the days surrounding the inauguration, and is seeing steady sales of an Obama periscope to let people see over the crowd during the inaugural parade.

Hard to believe--He's a one-man stimulus package! And we said he couldn't fix the economy. Just goes to show us, huh.
Posted by Average American at 1:10 AM

That's not all... it's a really bad case of overt Obamaworship or some subliminal "issue" going on in the Pepsi world these days, but have you seen their new logo?

I wonder how hard I will get to laugh when he falls flat on his face (after tripping us so we fall first) and the Bots get what they ASKED for?

Mean, yes; deleterious to the USA, yes; constructive, no. Yet somehow, I just can't help myself.

Next there will be large portraits on every building and they WILL be treated with respect and dignity.

Our presidency has become a personality cult.

I dont even want to shop now my friend...u should have seen the t shirts in the womens stores...all overrrrrrrrrrrr!..u cant get away from it like Mao Tse Tung!...argggggggg!...(hugs!)

I saw a guy in the grocery with his pants around the bottom of his ass with an Obama tee-shirt and a Obama hat cocked sideways and all I could think was, "Oh, dear God."

Obama gets the last laugh on you deluded right wing fools. This guy is better at capitalism than any of you. Hahahaha...

I really hope that Truth is right when he makes these claims.

Allee, I'll be sure to check out the Pepsi world. It is my colo of choice, but maybe not for long.

Shoprat, I just left a comment at Z's that I might splurge on a big picture of the messiah to use as a welcome mat.

Angel, I can't say as I blame you. Can you go a month or more, without shopping, until this crap finally fades away, I'm not sure I can. (hugs back atcha)

Brooke, I hope you were able to get outside before you wretched.

Truth, it's not like any of this was his idea. People are making a profit from the mass hysteria. That is called Capitalism.

CH, Nah, Truth just likes hanging around conservative blogs. I think he is actually a fellow conservative trying to escape a liberal body.

Tapline, cultism for sure! I have numerous friends who I never would have believed would fall for the crap that went on over the past 2 years. Most are still in a dazed state. Some have already come to their senses and are showing the signs of buyers remorse. I feel confident that more will realize they have been duped as time rolls on. To late now though.

For what it's worth, I think I found everything on your list except for Reagan hot sauce & the periscope... but then, Ronnie's got bridges & airports named after him, & folks still pushing to add his face to real money, & perhaps Mount Rushmore, too, so I think the lack of hot sauce can be forgiven...

repsac- At the least the late great Ronaldus Maximus is worthy of idolatry. Obama has accomplished what exactly?

I hope you don't mind, but I decided to borrow your "The Messiah" picture for my blog...I just couldn't resist, especially with the innauguration starting in a few days, LOL.

Just wait: the very moment Obama is inaugurated the DEM/MSM are going to immediately begin writing that the economy is coming around. Things are not quite so bad. Life is getting better. Spin spin spun. And all, of course, courtest of The One.

I see that you are just as sick of this charade as I am.

Obama sure has a nice house in an expensive Chicago neighborhood for a socialist. I think you deluded right wing fools are just jealous because Obama is better at Capitalism than you guys. But relax. He's put together a great team to make America better and help all of us realize our dreams. Hope and Change have arrived! Solidarity Brothers and Sisters!

I'll bet my house all that Obama crap was made in China!

Repsac, I'll be buying a door mat if I can find one, and perhaps a dart board.

DaBlade, thanks for stopping by. I just checked out your blog and liked what I found. I'll be back.

Thru my Eyes, thank you very much. I've been over to your place a few times, and you do a great job also.

Peter, thank you and thanks for visiting. I popped over to your blog and wish to welcome you to the blogosphere.

CH, no problem friend, I consider it an honor when someone "steals" my stuff.

BZ, you are probably right. They will try to spin it like everything is swell starting Jan 21st, but I think Americans will see through that smoke screen.

Bob, I most certainly am. Your last post was fantastic. I believe like you, call a spade a spade! If something smells like shit, it probably is shit!

PCC, I don't know if NObama is the capitalist on this or not. The street vendors certainly are though, and the Chinese who made it all.

Truth, do you really think NObama bought that house with his own funds and that it was a 100% aboveboard transaction? That is a delusion my liberal friend.

.....But relax. He's put together a great team to make America better and help all of us realize our dreams. Hope and Change have arrived! Solidarity Brothers and Sisters!.....

Seriously, you need to cut down on that koolaid, it's affecting your sanity.

Beth, you won't get ME to take that bet!

soon Obama will get to be on a popular TV show, called the BIGGEST LOSER

AA,
At least capitalism will survive for a while. Of course, if the hot sauce sales don't take off, I'm sure a bailout can be arranged.

Angel, actually yes there is. You probably saw it in my newest posting before you came here.

Daily gun picture, I wish, unfortunately, we Americans stand to lose worse than he will. I look forward to a BAD 4 years.

L&O Teacher, now THAT was funny, sick, but funny.

I can't believe all the Obamaworship stuff was being "sold"... why isn't it free? Isn't Obama gonna give us everything for free. Why are they selling this stuff??? - (that is capitalism and the free market) & any libs know that you can't depend on capitalism and the free market - They should be giving their stuff away for free in honor of a President who is gonna give us all stuff for "free" -- HA!
Great blog & post!

That is a very good question Red Voice. It would show that they "put their money where their mouth is". I think the problem is that they have no problem giving away our tax money, but their money is a different story.